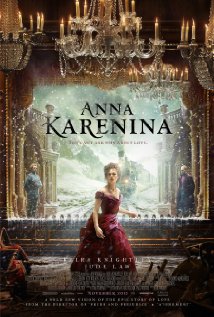 Poor old Joe Wright, he got bored of cinema; bored of its infinitely malleable space and myriad of possibilities. The top of his head yawned back, like a convertible’s soft top retracted, as he contemplated tiresome conjuring tricks like the cut – such a crude elliptical instrument, or the set, a trite simulacrum of reality, so petit bourgeois. Yes, Joe Wright leafed through Tolstoy’s tome, impressed by its dynamic and inventive unlocking of consciousness and the vivid construction of time and place, and reasoned that such a canvas, so beautiful, so rich, may be the apotheosis of the novel form, but to use the cinematic apparatus in a bid to achieve the same ends would be a vulgar slight against Leo; a stain on his manuscript.

So Joe Wright, face palsied with hate as he thought of the illiterate proles, with their gross expectation of cinematic realism, the transmission of tone from the page to the screen for the benefit of those that had not, would not, pick up this novel and scan it with their doe eyes, vowed to frustrate any attempt at democratising this wedge of high culture.

Thus Joe, a filmmaker by trade, sought to preserve the novel’s mystique and cultural exclusivity by aping an altogether less inclusive medium; one that remains inaccessible to the hordes, and which, like Tolstoy’s oeuvre, is considered to be a retreat, a sanctuary if you will, for the intelligentsia, who must endure the witless prattling and half-bakery of the mass at all other times.

Joe chose to take the filmmakers’ tools and make theatre.

Regressive vandalism, yes; inverse snobbery, sure, but my word what glorious two dimensional sets, what artifice, and the real time scene changes – what a novelty for the multiplex morlocks! Sure, not a moment of it feels real, and the mannered performances, stage turns, are a world away from the novel’s nuanced construction of subjectivity, a technique that threw up real-to-touch human beings for our delectation and judgement, but wow.

Still, JW, unable to break the celluloid shackle entirely, though it be just a strip of film, occasionally employs those crude instruments, perfected over the last century, to augment his night at the playhouse. Perverse it may be, but there’s pleasure to be had in listening to the rhythm of Anna’s fan segue into the pounding of hooves from Vronsky’s horse: it’s as though we can hear her heart beat faster, share her anticipation, partake in the concern for her lover – it’s a moment of, and the bile mixes as a I type the words, cinema, ruined only by the steed tumbling off a wooden stage.

And we daren’t forget the moment that Karenin, loathing his adulterous feminoid, tears up the request to be by her bedside, the tossed pieces transformed from confetti to snow. What a wonderful moment. Imagine how it might have played against a panorama rather than diorama. Actually try not to think about that, this isn’t for you.

“She broke the rules” says dour faced socialite Mme Kartasov, eyeing the ostracised Anna like a dead bird in a cat’s mouth. Well so did our Joe, and whereas rules are of course made to be broken, so said a man who didn’t grasp their basic function, his substitution of a different set, a limiting set, puts constraints on this adaptation that strangles it at birth. High time this play closed.

Certificate: 12A for the egregious waste of the medium's potential.