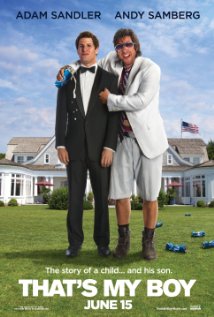 Fans, for surely there are some, of the 1980’s sitcom That’s My Boy, starring Mollie Sugden, will be disappointed to learn that this excremental Adam Sandler artefact bares no relation. There’s no DNA shared with comedy either, for this a profoundly unfunny, sporadically unwatchable import from a universe in which laughter can be mined from shouting and feculence alone. It may be the worst film, in any genre, ever made, which considering Sandler’s immense contribution to that longlist, can be marked as some kind of terrible achievement.

The foundation to this tiresome, brain atrophying slog, is a paedophilic wet dream; a teacher who molests a thirteen year old during a detention, only to become pregnant and go to prison, leaving the statutory rape victim, a profligate hardon, to raise the bastard. One assumes that if the educationalist had been a man and the victim, a still developing feminoid, the God’s of comedy would have struck this down at the pitch stage, but sadly, we live in a hypocritical, damn right odd society, in which male molestation at the hands of an older woman is a teen-boy fantasy, and so innately desirable for the target audience, whereas a reverse gender grope from an inappropriate adult is deemed to be one of the worst crimes imaginable.

So in order to enjoy That’s My Boy you must accept that the rape, though legally condemned, is a bit of fun, because the young Donny desired it, and that the act of having sex with your teacher, if you’re a boy, is a badge of popularity, creating a notoriety for the half-pint lothario that propels him to teen-celebrity. The site of an entire hall of kids, cheering on Donny, caught mounting his marker, with staff punching the air in the shadow of a banner reading “the world’s greatest”, will be a sobering moment for everyone in movieland, but even worse is to come.

The fun truly begins when a now adult Donny, a spoilt, brand sponsor swilling wastrel, played by Sandler sporting his stroke recovery voice, infiltrates the home of his son’s fiancé in the run up to their wedding. Todd (real moniker Han Solo Burger, for he was named by a child you see) is, as you might expect, the antithesis of his Pop: uptight, straight-laced and responsible. What ensues can only be described as a voyage to the bleakest, blackest nooks of the human experience – incest, Vanilla Ice urinating on himself, ejaculate licked from a wedding dress, incest, granny sex, Willis from Diff’rent Strokes, oh and incest – that suggests all concerned hated their audience, and indeed themselves so much that their only desire was to make them feel as unclean, as violated, as a genuine victim of child molestation. Once you’ve made it to the end, crawling home, like the Son of Brundlefly to a plate of gruel, you loathe yourself as deeply as one suspects and hopes Adam Sandler does when he closes his eyes at night.

Wretched, misogynist and a touch fascist, That’s My Boy is the absolute bottom of the cinematic experience. There’s a special place in Hell reserved for both it and the inevitable clutch of mentally ill fans that will surface in time, collecting like scum on dirty water. Production note: if you’re invited to appear in an Adam Sandler comedy, you’re finished. That’s you and your career. Reject the offer – it’s better to die in obscurity than allow the video obituarists of the future access to that footage.