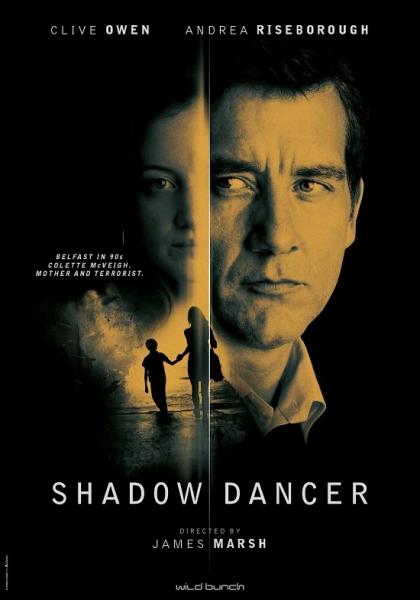 Nobody, including James Marsh, the man who ultimately took the job, wanted to touch newsman Tom Bradby’s Troubles yarn if it meant taking a political stance. You can understand the reticence. Now there’s peace in our time, with the psychopaths’ guild that was the I.R.A finally, reluctantly, subsumed into the democratic process, following a long and tortured experiment with fascism, no funding partner or artiste wants to dig up old animosities…or the body of a missing mother with bullets in her knee caps.

No, everyone on both sides of this involving Anglo-Irish thriller was insistent that the story of a mother in a republican family turned informant, should take great pains to remain even-handed. Thus it’s afflicted with a safe, eye for an eye mentality, focusing on the attempts of Andrea Riseborough’s Collette to stay out of prison and be with her son, following capture by British spooks. The opener, set in 1972, resplendent with instagram photography, lest we forget it’s the past, establishes that she’s part of a radicalised brood, her kid brother gunned down by what’s presumed to be trigger happy British soldiers. Consequently we can understand how she’s later co-opted into terrorist activity on the UK mainland; the daughter of the family cell.

We’re never asked to reconcile her status as a doting Ma with moral anomalies, for example, the realisation that had she not turned turncoat, she’d have been a willing participant in the murder of a RUC officer, the father of several young children, or that this den of killers have crucifixes affixed to their bedroom walls, apparently without irony, but then the movie’s too supine to judge its protagonists. In war, it seems, we’re all victims. Ahistorical tripe perhaps, but it plays well with the money men.

The film’s charge comes from the relationship between Riseborough and her handler, played with typical understatement by Clive Owen. Bradby’s screenplay attempts to show that the British government are equally cavalier about life, introducing a conspiracy amongst the ranks to protect their existing mole by throwing suspicious I.R.A enforcers “red meat”, the newly recruited Collette. Marsh is insistent that there’s moral equivalence between these duplicitous and sacrificial intelligence tactics and the murky underbelly of the republican struggle, but the parallel is never wholly convincing. Owen, intense in exchanges with cold superiors, sells it well, protective of the lamb he’s inadvertently led to slaughter, but once that professional integrity mutates into sexual interest, as we desperately hoped it wouldn’t, the script’s naked manipulations begin to pry the film from its moorings.

Despite Shadow Dancer’s lack of guts, it broadly succeeds in building tension, thanks in part to Marsh’s character-focused direction and an excellent performance from David Wilmot as the malevolent I.R.A man with Riseborough in his sights. A terrific scene has the senior murderer putting his quarry through a short interrogation while plastic sheeting is unravelled next door. In moments like these, Marsh’s film brilliantly evokes the fearful, morbid undercurrent to Belfast in the last years of the conflict – a place where life and death could pivot on a wrong answer. What’s missing is that comment in the margin; moral outrage, endorsement – the conflict’s true currency. Without it, despite the taste of grit, this is of no more interest to students of the Troubles than airport lounge material like Tom Clancy’s Patriot Games.