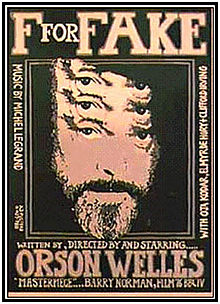 But is it Art?

Greetings, fair reader; this is to be a different kind of review for what Orson Welles deemed to be a new kind of film: a discussion where, like Orson, I invite you, in character as a mischievous uncle, to step across the critical threshold, piquing your curiosity and demanding your attention. I may, like the silken-toned rotund, employ misdirection and grammatical flourishes; stupid names for sub-editors I know, but they had cruel parents; to take you on a journey into the world of art and its forgers; a substrate of existence only accessible to the well-educated and readers of this esteemed internet organ. I may not. What I can promise you, my good patron, is that I will never lie to you and that said promise ran out a paragraph ago.

You may know of the academic and critic John Carey and his iconoclast’s bible, What Good are the Arts? In it, he makes this statement; seemingly obvious but necessary given centuries of received wisdom: “a work of art is not confined to one person’s response to it. It is the sum of all subtle, private, individual and idiosyncratic feelings it has evoked in its whole history. And we cannot know those, because they are shut away in other people’s consciousnesses. Yet if we do not know them, we cannot really know even a single artwork. So it seems that none of us knows much about art, though we know what we like.” That thud you heard was Brian Sewell dropping dead from shock. We’re now stumbling, naked and bloody, through the rubble of what used to be the art establishment.

Ah, you say, but what of scholarship? Well, that gives us biographical detail, information that allows us to appreciate, say a portrait, within a wider historical context, but for Carey, and perhaps for most of us, it cannot measure how people, ordinary people, felt about the work, assuming they cared to look at it at all. It can only transmit ideas that were ever restricted to a small cabal of experts, who in turn, we may suppose, were taught how to think and what to look at.

What, you’re entitled to ask, has this to do with F for Fake? Perhaps nothing, perhaps everything when Welles introduces us to Elmyr de Hory, whose forgeries, many knocked off before lunch, aping Modigliani and Picasso, were said to be hanging in some of the most prestigious galleries in the world. But surely, says you, experts, with their trained eyes, would root out the fakes with consummate ease? Gleefully, rapturously, Elmyr, and his biographer, the infamous Howard Hughes hoaxer Clifford Irving, report otherwise. Brother, pour the wine!

It’s quite a thought. As Elmyr burns a morning’s work, fraud on canvas, worth hundreds of thousands if flogged to the right sucker, it’s enough to provoke a spiritual crisis. If no one knows anything and value is arbitrary, perhaps by extension meaningless, then Welles’ unassuming little film, part documentary, part poetry, part stream of consciousness, tears down what our old friend John Carey calls “immortal monuments to the human spirit”. F for Fake leaves us with a spiritual void; a glorious, secular, violable realm in which even the lies that tell the truth are lies. Oddly enough that gives the movie the texture of truth. Not bad for a few vignettes and footage of Welles engaging his continental retinue in witty dinner conversation.

The old impresario wants to kick over the statues and who can blame him, given his formative experiences with the powers that be? Did any director in the 20th century have bigger wings than Welles? And did any have them clipped so brutally? Here he pulls us into a whirlwind, reminding us, with typical slight of hand, that film is the most honest medium for fakers; it’s a box of magic tricks which, in the hands of a master manipulator like the portly wunderkind, inawes as it entertains.

In throwing up the likes of De Hory and Irving, as well as his then girlfriend Oja Kodar, who assists him in playing a trick on his audience, Welles openly questions the authority of informed opinion (informed by what?). F for Fake anticipates the distrust in the art world that is now common cultural currency. The movie paints a picture of the establishment as a closed shop, talking to itself, in what we may imagine is a series of thought terminating clichés, and consequently the film is marked as an act of modernism. We each bring our own thoughts and feelings to such works of course, but I’m happy to tell you that I found the experience both stimulating and gratifying.

Fake paints a refreshingly vulgar picture, then; it talks about art as commodity, about forgeries simply meeting demand in a market that can only exist because of prevailing attitudes toward taste and aesthetics, and the imagined exclusivity of such tastes – those old lucrative crutches; it hacks away at the meaningless metaphors of high and low brow (what is the true value of a Modigliani when De Hory can ape him in an afternoon and sell it for a small fortune?); it tells us that what we like is just fine and that the value of art is measured in something other than currency, though in this case the price of a cinema ticket will do nicely.