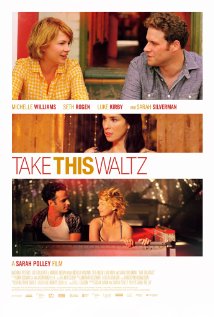 Sarah Polley’s romance, gilded with comic touches, has both an ear and eye for life’s ambiguities; that real world hinterland often excised from Hollywood romance in the interests of neatness. What a pity that more women don’t import their films from Canada; perhaps then the penis set, desperate in their bid not to be judged against fantasy archetypes, would find better girlfriends. Who knows, we might start winning some arguments. Can you imagine it? A world in which refusing to be caricatured got you somewhere: what would that be like?

Michelle Williams’ Margot, impish and immature, is tempted from her sweet, though static five-year marriage by her neighbour, a man who threatens to mine her untapped zing. The filmmaker is also handed a red apple, the temptation to make this a movie of high drama – fisticuffs and tears. The first scene, Margot cornered into flogging an adulterer in a piece of outdoor theatre, heavy handed symbolism abound, suggests the lure will be too strong, that Polley has melodrama in mind. But this opener is a harmless indulgence; it turns out it’s a film about small moments after all, the kind that will be instantly recognisable to those who’ve managed slow decline within their own relationship.

Long before the real sun has started to set on a Toronto beach, with Margot’s would-be lover bidding to give the conflicted feminoid a try-before-you-buy day out, the movie’s sumptuous red and orange palette has primed us for the turning point. It literally looks as though as the sun’s been setting on Margot and kindly, cuddly Lou’s marriage from the get go.

It’s there in the silent moments; the couple horsing around like pre-school children, playing practical jokes on one another – a substitute for conversation. Aside from honestly capturing all the infantile, idiotic shit couples do with each other behind closed doors, Polley dramatises an uncomfortable truth; that a relationship doesn’t have to be fraught to be built on sand, that routine and a lack of intellectual stimulation can chip at the foundations. When Lou, played with great sensitivity and warmth by Seth Rogen, tells Margot, during a near silent anniversary dinner, that they need not talk because “we already know everything about each other”, a million men will recognise the one line cover up. A million more women, one suspects, will feel their heart sink with Williams’.