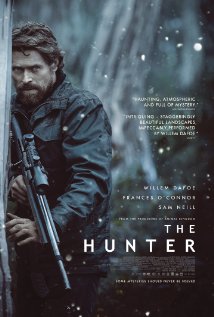 “Ed, are you alright?” The words open a valve and consciousness comes flooding in. Until I hear them I don’t realise how far I’ve slumped forward. Now I can feel my head; it’s like a cannon ball’s docked in my neck stump. Willem Dafoe’s been in the wilderness for many weeks now and I’ve felt every second. Long ago, when he was in Paris getting instructions from a biotech firm, the kind that encourages our irrational distrust in science by operating without ethics and with two fingers to the natural world, I can remember thinking that this Tasmanian Tiger hunt might be rather exciting.

Sure, Dafoe would have to learn lessons about himself – any film character that rubs up against the elements faces an existential crisis; nature throwing its weight around, issuing a corrective to the bear trap of modern life; but perhaps along the way he’d be threatened, ravaged or hunted himself by the company’s equally unscrupulous competitors. My mental map of Dafoe’s journey had these plot points marked as places of interest; major stopovers for the two of us; but Daniel Nettheim had other ideas. Little could I have known, as a solemn Willem boarded the plane for Tasmania, we were in the hands of a tour guide who’d eschew these landmarks for contemplation in a family log cabin.

How long since something happened? An hour? Two? Time passes slowly in the uncivilised world. Still, what lavish landscapes, what bountiful environs! When Willem’s not in that rustic homestead, scrubbing his tub, or playing handyman, or thinking about claiming the missing husband’s privileges, then he’s slowly, methodically exploring mountain country, ambling through the forest, brushing bracken, pawing earth. Christ, my eyelids! It’s like trying to hold up a heavy windowsill with one finger.

“Collect biological samples,” that’s what the biotech people said, “find that Tiger” – it’s ridiculous to admit now, but I’d thought of a Tasmanian Tiger Park, living biological attractions! And then Sam Neill shows up – no, really, here he is, and he’s brought that hat. Surely now he’ll be a substantial player in this thing? After all, you don’t hire Neill to stand still and sway with the breeze.

I right myself in my seat. I’ve got to stay focused now, the firm have sensed that Dafoe is more enamoured with being a family man than putting a bullet in their beast. Now, after many hours of soul searching and trying to connect to life’s simple, narrowing pleasures, it looks as if this weather-beaten sad sack, this ennui engendering misanthrope, has taken to the great outdoors, rifle acock, and may, at last, see some action. Another hunter must be on their way. This is it; Mano a mano in hostile country. Now he’s there! It’s come! Time for ac- what- is that it? I watched Dafoe drink a beer and take a bath for an hour, for two minutes of locking antlers?!!!

Okay, so this isn’t the man embattles nature thriller I’d dreamt about, rather one of those gentle, that is to say passionless, drama free, redempt-o-ramas in which a brutalised loner finds solace in simple, human warmth and the promise of intercourse, and the audience learns, or rather re-learns, an important lesson about the toxifying relationship between homo brutus (that’s us) and the land.

This bucolic bore-a-thon was perhaps better suited to Julia Leigh’s novel. No doubt her vivid descriptions of the unspoilt wilderness and the hunter’s touching re-connect with domesticity was peppered with interior insight on the page. But on the cold and uninviting big screen, with characters shorn of their thoughts and the relationships between them reduced to clipped exchanges, wistful looks and all of this, mere punctuation, breaking up hours and hours of tourist photography, there’s little to gird the loins or ply the grey matter.

“Ed, you’re snoring!” Did someone say that or did I dream it? Wait, is this entire movie a dream?! Chances are I’ll never know.