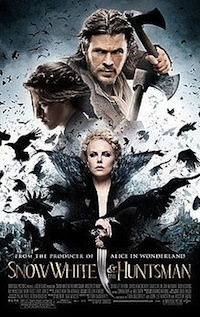 During a blazing phone row in the mid-seventies, Paul McCartney once again felt the sharp end of John Lennon’s tongue when his former band mate dismissed his output as “pizza and fairytales”. Lennon’s insult described a penchant for disposable whimsy, but 40 years on it’s a surprise that Hollywood hasn’t adopted it as their official strap line. The American majors are never happier than when repackaging old bedtime stories like Snow White and the Huntsmen, Universal’s folkloric dump. Did we need another version? Ah, but this is an adult spin on the Brothers Grimm. What does adult mean? It’s the merciful excision of sentimentality, jokes about flatulence, Dwarf humour, flat post-modern asides inserted to fluff bored parents, and songs. Thank God, no songs.

Real children, of course, will recognise the term “adult fairytale” as a misnomer. Flesh and blood progeny, of the kind that occupy schools and cub huts but manifestly not the imagination of L.A executives, revel in unpleasantness. They expect the goodies to prevail, obviously, but the best bedtime storytellers, Roald Dahl and the like, always understood that cruelty and feculence holds greater allure to young minds than rainbow pudding and moon soup. So why, I hear you cry, this fiction that the likes of Snow White is for yellowing eyes? Can’t Universal make a movie for real jaded grownups? Are we so infantile; the children of Sarah from Labyrinth and Peter bastard Pan?

No, for adult read young adult, and for young adult read a desaturated colour palate, school of fine art production design and stylised fantasy violence, augmented by computer animators with deep and incurable emotional problems. Snow White is therefore equal to the teen imagination, the kind that’s been cooking since the anal stage. It’s a gorgeous, retina raping fantasy, with medieval bunting and looking glass accoutrements. Drinking in the dark turrets, beasts and bird-spun sorcery makes for a very fine visual treat, but neither man nor his offspring can live on dark art alone. In story terms, the film has to “show up” and when it does, it’s less than promised by that gilt packaging.

Snow White’s a reminder that even the most lovingly crafted fantasies can succumb to formula. Debut director Rupert Sanders choreographs with an energy that suggests he may hold ambitions to do this on a full time basis, but the screenplay stuffs fantasy clichés into the characters’ mouths and can find nothing for them to do bar congregate and mull for what feels like a long and uneventful second act. During this travelogue interlude, the band picks up additional members, as is their wont in these types of movies, and a preternatural relationship with the land and its creatures is flaunted, in contrast with Charlize Theron’s black-hearted queen, who literally sucks the life out of the same. In other words it’s porn for pagans; the kind of movie that will play well at The Corn Exchange.

It’s a boon that Theron is such a majestic presence throughout, because her co-stars, the demonstrably (and from a plot point of view, problematically) less fair Kristen Stewart, and the curiously accented Chris Hemsworth, fail to gild the lilly with excess personality. It’s a thankless job in any fantasy adventure, yet character actors can usually give something of themselves to aid the cause. Perhaps Saunders should have cast some. If demure and gruff is all we get, the disappointment reaches fatal levels once it’s clear that the trailers money shot, Theron screaming in a room of airborne black shards, has been cut from the theatrical version. So much for happy endings.