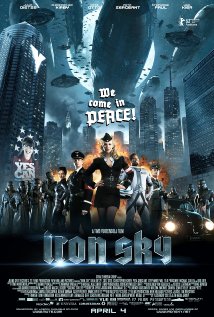 If Iron Sky is the answer, what is the question? How about, what happens when you have a concept but no story to tell? Or, if fanboys formed a co-op and funded their own movies, what would they look like? A better question: which movie vividly illustrates how George Lucas has shaped the thinking of a filmgoing generation? George went to film school of course. He knew it took a lot of effort to make it look easy. When you junk that hard work and put all your faith in technology you get The Phantom Menace or, for a tenth of the budget, this space-ploitation brain fart.

Iron Sky has the kind of premise that will either awaken your inner-moth or break your heart. In 1945 Nazis escaped to the moon, built a base on its dark side and are now preparing to return and enslave the Earth with a fleet of diesel punk warships. Conscious that his pitch was Viagra for schlock hounds, Timo Vuorensola, Nordic nerd and member of an “industrial-ambient-noise” band, of the kind likely to win the Eurovision Song Contest, had a trailer made and took it to Cannes, where improbably he was given enough money to go into pre-production.

Cynics were already wondering if he’d been ensnared by the high-concept trap; after all vomiting up a premise is easy, writing a feature length screenplay stuffed with memorable characters, drama, wit and original setpieces, less so. In selling the portrait before he’d learnt to paint, the Finn was risking failure on a Hitlerian scale. These days, you can tear the cover from a snooker table, power up your Mac and the visual effects take care of themselves, but good genre screenwriting has been, and forever shall be, contingent upon an aptitude for storytelling, including some idea of what constitutes the same. If you can’t do plot you damn well better be adept at writing jokes. Watching the finished product, it’s almost a certainty that Vuorensola cared less about the script than rendering a photorealistic moon base in the shape of a swastika; he imagined his audience would share those priorities. Will these exploitation aficionados ever learn?

Given that for half the writing partnership, English is a second language, it’s perhaps unfair to criticise Iron Sky for being a little flat in the humour department. I doubt my Finnish screenplay would be full of zingers either. Perhaps one-liners lose something when funnelled through a babel fish. In the event, what makes it to the screen is brazen but unfocused; it’s like watching a garrulous, good natured drunk make up a story on the spot. The inebriate’s tale is shapeless and he struggles to pull the threads together, though often, if only out of embarrassment, lips are upturned.

The film’s strongest, and indeed blondest, when in Nazi company. There, amongst the grey and forties style machinery, the likes of Udo Kier and Götz Otto have a rip-roaring time playing jackbooted cartoon characters. This is the film the internet wanted to see and it’s highly enjoyable. Indiana Jones would feel at home with this troupe. Less successful are the Earth-set portions. The parts of the film set on die Erde seem to have been fixed with tartrazine. Stephanie Paul’s US President, a Sarah Palin caricature, has as much satirical punch as, well, Punch. Entry level satire is welcome of course; it gives teachers something to show the kids in the last class before half-term, but these are scenes that might have made Iron Sky a cult-film worthy of the name; all someone had to do was add wit.

Such missed opportunities contribute to the sense that Vuorensola’s Reichmare is packed with half-formed ideas, like Nazism, the best of which is to join the setup to the climatic attack on New York City. That’s achieved, but the journey is uneventful. Watching movies can teach you everything except how to make one.

The best that can be said for Iron Sky is that it delivers on the poster promise of a Nazi invasion from space. Credit must go to the animators who use the computer power bought with “fan” donations (remember when something had to be made to pick up fans?) to achieve credible visual effects, including a space armada of Zeppelins and Nazi Saucers. Digital sets do justice to Ulrika von Vegesack’s retro designs. In fact there’s plenty to engage the eye. If the brain had been pleasured with equal care, the Iron Sky might have been the limit. As it is, it’s limited.