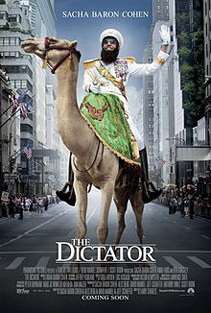 Warning: This review discusses aspects of the film’s plot.

Though he’s as English as a boorish obsession with the weather, Sacha Baron Cohen has good reasons to ply his wares Stateside. America shares his turgid obsession with identity politics. Racial and religious differences are more pronounced. The jokes have greater currency there. In the US, catharsis is achieved by underlining difference and aping prejudice, whereas in Cohen’s back yard; an old immigrant nation, by and large more successful at integrating new arrivals; there’s less emphasis on the clash of cultures.

The Dictator is another variation on Cohen’s increasingly lonely idea. A funny foreigner is dispatched to the US, iconoclast worldview stowed in hand luggage, to crack that most loathed of facades, American Liberalism. He’s a torch bearer, shining a light on intolerance and bigotry.

It worked rather well in Borat, where the Kazakhstani incompetent proved to be a lightning rod for anti-Semitism and misogyny, and it was still working, though not so effectively, when Bruno, a force ten Austrian homosexual, stoked mainstream American’s fear of alternative lifestyles. In both cases Uncle Sam’s nieces and nephews had some cause to be aggrieved. In place of a wholesale re-networking of the human mind, tolerance tends to function best when all parties agree to mollify difference, rather than wearing it as a badge of superiority. It’s underpinned by mutual respect. Cohen’s grotesques were designed to tear up that contract. That latent prejudice still existed was hardly a Pulitzer Prize winning revelation. Drunken frat boys and wizened conservative couples make for easy laughs when reality takes a back seat and the audience is ennobled as enlightened.

Cohen’s dictator was perhaps considered too dangerous a character to unleash on an unsuspecting American media and its audience, at least not in-story. That, you might think, is more telling than anything suggested by the blunt instrument wielded here. Perhaps Cohen feared that he’d be kicked to death on a New York street or would inadvertently provoke a diplomatic incident with a clueless chat show host, thereby burning his bridges with the US comedy establishment he wishes to be inducted into. What’s certain is that this scripted assault on US values, in which Cohen’s Gaddafi proxy survives an assassination attempt and is forced to lie low with Anna Faris’ ultra-liberal co-op volunteer, is a risk free enterprise. Borat cut deep, The Dictator couldn’t incise bread.

Certificate: 15 for turgid identity politics, genital exposure and one instance of Megan Fox.