Film Review: How I Spent My Summer Vacation 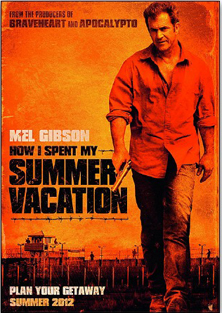 It may shock you to learn that How I Spent My Summer Vacation couldn’t command a theatrical release in the US. Was it something Mel said? Well, yes it was. In the last few years, the ol’ prankster, famous for his onset japery, including the baring of buttocks between takes, has turned his machinacious mind to the media and hoodwinked them in spades, though that’s not a word Mel likes to use these days.

His campaign to undercut his on-screen nice guy persona began in 1995 when he shot Braveheart, a browning script by Joseph Goebbels. It ridiculed the English as effeminate (Mel cleverly suggesting an additional hatred of homosexuals). It told the world they were rapists (both actual and metaphorical). Some were fooled. To the layman it looked as though Gibson had a colonial chip on his shoulder, heavy enough to lumber him with Richard III’s stoop, whereas others, notably the Scots, were wilfully literal; adopting the star and embracing the film as the foreword for an idiotic nationalist manifesto. Mel’s head yawned with delight, yet he wasn’t finished.

In the years that followed he planted stories in the media, suggesting he was an odious, violent drunk, prone to anti-Semitism, “the fucking Jews are responsible for all the world’s wars”, and, in a note perfect and wholly staged phone rant, a hater of women and the group President Obama likes to call “black folks”, telling his then girlfriend that he hoped she was “raped by a pack of niggers”. Toss into the mix an alleged aversion to Stem Cell research, on bigoted grounds, and his Passion of the Christ, explicit in its depiction of Jewish culpability for the death of Jesus, and the one time darling of Hollywood had the trade and popular press alike eating out of his hand.

Unfortunately, Mel’s campaign of disinformation has been so successful that when he finally broke cover, telling the world it was all a gag and he was closer to Martin Riggs than Martin Bormann, no one believed him. Consequently the aging star, face lined with stress, is now reduced to low-budget fare like Adrian Grunberg’s down and dirty prison movie. It hardly matters that Mel, rigid as a dried out cadaver, has but a hint of his former on-screen confidence; no one is going to see it.

Conscious he’s overplayed his hand, Vacation, co-scripted by Gibson, attempts to realign perceptions by putting Mel in a redemptory situation whereby a Mexican woman and her young son can be both his salvation and people he can save. It won’t be much comfort to the hombre he allegedly called a “wetback” but an apology has to start somewhere.

Gibson’s part, a thief sent to a Mexican hell hole to rot, looks to have been written by a PR company; he thwarts a rape, restores a family and kills drug dealers. He chucks in the world’s worst impression of Clint Eastwood. You could almost like this guy. Sometimes you forget his background and you do; such is the power of movies.

Vacation doesn’t have much in the way of intrigue or excitement; it’s an ugly movie on account of its digital cinematography; but for all that there’s a gruff, hardboiled escapade to be passively enjoyed, despite the rather creaky lead. Kevin Hernandez as the kid with the precious liver is suitably brash and downtrodden; he gives a spirited performance. That’s more than can be said for Mel, though this is the kind of movie where a husky quip and a frown is enough. Gibson lets his craggy features and jellied jowls do the talking. Given his pronouncements in recent years, that’s probably the way forward from now on.

Certificate: 15 for strong Mel Gibson and anti-semitism behind the eyes.