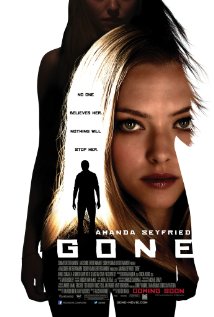 Much has been made of the inability of Amanda Seyfried and her seductive orbs (I refer to her eyes) to open this reluctant vigilante movie. How to explain it? Writer Allison Burnett has astutely tapped into the fear of sexual violence that stalks the female of the species; maybe too well. Early scenes construct the victim’s subjectivity with caked on menace. The dark streets Seyfried surveys are eerily empty. When her footsteps are joined by a second set from an unseen source, the heart rate keeps tempo and quickens. Amanda has three locks on her front door. Before we know why, those wide, penetrating eyes have already told the story.

Perhaps ladies don’t mind this heightening of their own deep seeded fears provided their man’s in tow; a cine-substitution for a can of mace. But early word on this thriller’s treatment of the cock and ball brigade may have taken a bite out of Adam’s apples everywhere. The producers must have hoped that Amanda’s allure would offset the handicap of having no strong, sympathetic male characters, after all the absence of female characters in movies has been de rigueur for decades. It’s enough they form a pleasing shape in front of the lens, looking good and doing nothing.

Sadly for Gone it looks like the male of the species notices when they are comparably sidelined. Should this matter, you ask? After all, Seyfried gives a tremulous, edgy performance; she holds the attention in every scene; those orbs are like a hypnotist’s spiral, I tell you. No, the problem is that Gone hates the male of the species and somehow they found out.

Every man in this movie is docile, ridiculous, emasculated or savage. Given both the writer and director sport a groinal appendage, we may be looking at a 94 minute apology; guilt at an innate predatory sexual impulse. In that event, Gone overcompensates. It’s all very well giving Amanda the power to vicariously avenge sex attacks, but it doesn’t do much for gender relations.

Mind you, it’s little wonder that Amanda has no faith in the law. It’s an ass, represented by the likes of eye rolling police chief Michael Paré and Daniel Sunjata, as the unhelpful detective whose feeble investigation into Seyfried’s kidnapping (a week’s survey of a 5,000 acre park) has, we suppose, allowed the killer to remain free and kidnap her sister. Once on the trail, and showing an astonishing aptitude for police work, every man Amanda meets (not easy to say at speed), looks to have been requisitioned from the rape department at Central Casting. From Wes Bentley’s conspicuous red herring, dead eyes and all, there’s simply no escape from the gaunt, the unclean, the shifty and the out and out creepy.

Naturally, Heitor Dhalia’s job is to keep us guessing, but the Brazilian is less adept at maintaining suspense than demonising his own sex. The baffling inclusion of a heavy breather in the opening scene, surveying Amanda’s exploration of the forest, kills the question of whether she is, as the police claim, a nut job that’s imagined her whole ordeal. With that settled, there’s little else to do but spin out the question of her stalker’s identity, but attentive audience members, and perhaps inattentive ones, are tipped off early enough to frustrate Dhalia’s attempts at implicating the rest of the species.

Despite these notable lapses in technique, Gone still captivates in spurts. The audience is well conditioned to share in Amanda’s anxiety from the get go and her final trip to meet her foe is nicely teased out, with enough dead of night atmosphere to induce jitters. If it has any value at all however, it’s Seyfried that adds it. She may not have convinced anyone, male or female, to show up, but her committed turn adds urgency and drama to scenes that would have corpsed otherwise.

Certificate: 15 for strong misandry, Seyfried in peril and in-movie spoilers.