Film Review: One for the Money 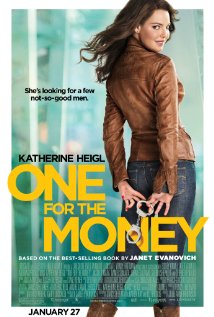 It’s just possible that author Janet Evanovich overestimated the box office potential of her Stephanie Plum series, when she said of the long gestating first adaptation, “hard to believe they’ve been sitting on this multi-million dollar franchise for all these years but go figure”. Well, the figures are in and it looks decisively as though Hollywood has used its alchemic wizardry to turn Evanovich’s plum into a turkey.

What went wrong? Isn’t there a gap in the market for a sassy, sexy gumshoe, the shoe in question being a heel, size 8? You bet ya sweet buns, as Plum might say, yet without the proper focus and a sense of what makes the character work on parchment, something’s going to go awry.

Cineastes with long memories will recall the ill-fated V.I. Warshawski, the first in a planned series of hardboiled sleuth-outings for Kathleen Turner, ripped from Sara Paretsky’s novels and murdered in translation. Then, as now, with an eye on similar failings in One for the Money, a strong and appealing female lead was undercut by a broad, comically-overwrought treatment. It’s almost as if the writers of both movies just didn’t buy into the edgy, Marlowe with mammaries concept, imagining instead that as a female antihero is an inherently comedic construct (aren’t the ladies usually black widows or victims?), why not roll out that kookiness to the rest of the cast, making the supporting characters as Tex Avery as possible? I’ll tell you why, because it turns your movie into a laboured affair in which the immigrant shtick (it’s a bad showing for Italian and African Americans) and attractive-woman-all-at-sea-in-a-man’s-world-yet-somehow-doing-better-despite-or-perhaps-because-of-her-feminine-attributes routine, becomes trying. Fast.

If the movie is stillborn it certainly isn’t the fault of Katherine Heigl. Despite being saddled with a series of affectations rather than attributes – deep red lipstick, a taste for “big gulp” sized soft drinks, a blue Buick – and thankless lines like, “Hey, why are you messing with my Tastykakes, huh?”, she carries the movie’s corpse on her slender shoulders. Unfortunately, she, like every stock character who turns up during a mirthless ninety minutes, is hostage to a soft-boiled plot.

We might have cared more about who murdered who, why, and what this has to do with Stephanie’s bail jumper, if it felt as though something was at stake, but the film is too busy stabbing its cheek with its tongue. Pulp can survive a lack of depth of course; a fan of the genre will settle for atmosphere, moral ambiguity, sex and a hint of mystery, glued together with barbed dialogue. Unfortunately One for the Money’s attempts at the same are parodic and empty.

The treatment of Heigl’s character is typical of the movie’s M.O. Plum makes the seamless transition from ex-lingerie clerk to bullet dodging, bomb ducking, underworld excavating, homicide sleuthin’ bounty huntress in less than 24 hours, only to tell us later that dealing with pressure isn’t her strongest suit. What you wouldn’t give for the three writers to have talked to each other.Once on the trail, the substance evaporates. The best investigators, the ones that talk to you in voiceover, have a past; a lovely but lethal former squeeze, and Plum is no different, but when the relationship with Morelli, her meal ticket, is a series of hyperactive encounters – what the kids call banter, it’s less Bogart and Bacall, more Bridget Jones rows with Daniel Cleaver. If the romance is D.O.A, what hope that the suspects we meet on the way will be more interesting? None as it happens.

Fisher Stevens, typifying the movie’s nonchalant approach to populating the plot with human artefacts, is on screen for all of 2 minutes, only to be unceremoniously incinerated. This could be cinema’s belated punishment for his blacking up in Short Circuit, but it’s more memorable for being unmemorable. The same straw men and women appear throughout; the sleazy boxing promoter, the loud mouth hooker, the meat-head cop and alternate love interest; their heads yawning open, flabby sentences spilling out; white noise washing over an indifferent crowd.

Heigl deserves better than this, not least because she’s a potent presence, but the real loser is Janet Evanovich. With another 17 Plum novels in print, she was surely confident that this was the beginning of a lucrative partnership with the big screen. As it turns out, it’s the end. Still, comfort for the thwarted franchise author is only a phone call away. Clive Cussler’s number is in the book, Janet.

Certificate: 12A for hands covering breasts and summary justice for Fisher Stevens.