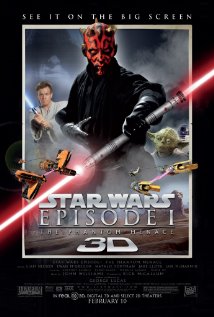 It was with much trepidation that I took to the cinema to see a new version of my all-time favourite movie, The Phantom Menace. I did so despite news that George Lucas, the tinker, interned in his Xanadu, had changed it utterly. A new screenplay, pages ripped from a monkey’s typewriter, replaced film’s blueprint for modernism. Qui-Gon Gone! The political intrigue stripped out and overlaid with vulgar adventure! Oh George! Vandal! Your drive for perfection, your compulsion to reshape the clay, pressing harder into that dun dough, has made a hag of a once beautiful face.

Oh beard! Space-Bard! What possessed you to do it? At night, at the ranch, were you tormented by the ethereal flapping of slack-jawed adolescents; dunces with biblical facial hair, doe eyes and sloganised tees? Did they reveal themselves to you, as Kenobi did to Luke on that Hoth glacier, raping your sense with the battering ram of indignation?

Had you asked me I’d have told you, for the virtues were clear enough, why not so much as a frame should be touched. I was there on that first day, back in May ’99, emaciated and half-mad, tripping over my own whiskers, having queued for half a year, lashed by the elements like some ancient coastline. I’d suffered the buggerings, the dysentery, the dependence on pain medication and charity; all for the chance to say I’d been there, to write myself into this history, and what I saw on that opening night changed my life. Oh George, you were bold! Bold as brass taps affixed to a milkmaid’s teats!

No-one had used a fully autistic cast before. We were moved. Many in my row wept. In a stroke you’d pioneered a new technique, full immersion for the audience, allowing them to project their own characters onto blanks. For the first time we were psycho-active participants in the Star Wars universe. Because I knew you, knew your influences, I understood that The Phantom Menace was the realisation of twenty two years of studious reflection on film form – theories of space and movement that you’d studied under Lester Novros at USC. No teacher could have been more proud.

Those long wide angle shots in which your mannequins stood idle, beset by curiously un-alien Italian architecture; your humanoids rooted to the forest like the surrounding trees; yes, this was a break from the received wisdom of the past. The first three films had been enslaved to Hollywood convention; they had no claim to art. The compositions were so crude, so obvious, so intimate; the look so constructivist, so high-tech. Menace was a different beast – a movie without intrusive characterisation or bulk; a film in which everything was smooth and inert; a film we had time to study without unnecessary clutter or distraction; fortified with a sedate score that rendered those initially excitable audiences meditative and suggestible.

I despise Menace Redux. I hate its insufferable logic, its conspicuous schema; the simple matinee character-focused action, full of jeopardy and excitement. I loathe the fact I can remember every polished line, hum every leitmotif. What was opaque now has garish clarity. Where were the caricatures of Jews, Japs and Blacks that imbued the original narrative with such tension? Where was the scatology for toddlers still fixated on rectal refuse?

The daring thing about the 1999 film was its conscious identification with its audience and their filmmaking prowess. It mirrored their understanding of story structure, character and dialogue, subverting their expectation of something more professional. It’s the movie that said, “This is the film you’d have made, had you had Mr Lucas’s resources. Not because you’d have wanted to, but because you lack the ability to do otherwise. You can hardly complain if we’ve made the movie you’d have made yourself.” This new version plays like a filmmakers’ labour of love. The imprint left by my youth has been filled with Bungaroosh made from pixels and folly. Oh George, why?*

*The reviewer later learned that the remade movie was a mesmerist’s illusion. The above had been suggested by subliminal messages inserted into the interstices between foreground and background plates in an otherwise unremarkable 3D conversion.

Certificate: U - ugly for all.