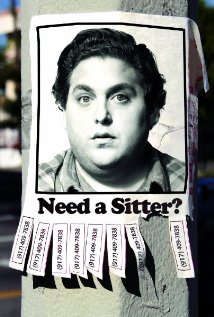 Jonah Hill’s bad babysitter caper is film formula for kids allergic to cine-breast milk. If it’s witless and disposable, that’s because there’s little room for goodness in that confected gloop. It’s designed to sate your hunger, not fortify you.

But it doesn’t stop. The movie can’t divest itself of interpolated broadsides targeted at each and every pocket of that coalition of viewers, anymore than a word can leap off the page of a bad novel and join with an alternate text. Consequently it’s your privilege to enjoy crude sex comedy, scatological humour, romance, turgid identity politics designed to widen the Sitter’s catchment area to include urban and Hispanic audience members and finally life lessons that facilitate a family restoration. It’s all there and compressed into just 81 joyless minutes.

Hill remains a likable figure; he’s got that sweet, put upon shtick off pat. But inherently decent though he may be, and wish him luck with Kylie Bunbury’s buns though we do, because ugly and overweight men enjoy a vicarious fuck with a beautiful laydee, it’s impossible to care about a story this thin, populated by straw men and women.

As ever with movies designed to stoke the crude sensibilities of a largely imaginary audience, there’s hypocrisy in the film’s humour; jokes with cheap appeal that get a wagging figure at the close, once they’ve done their evil work (presumably so they don’t break the censor’s moral compass). The case in point is the unfortunately named Landry Bender’s character Blithe. Aged in the 5-7 range, the gag is that she’s prematurely sexualised herself – heavy makeup, misandrist hip-hop on her iPod, a propensity to refer to everything as “hot”. For 79 minutes we shuffle uncomfortably in our seats as she flaunts those taboos, only for Hill, with the end credits scrolling across the horizon, to finally jump in and remind both her and the smirking audience that wanting to grow up too fast isn’t cool.

Wrongheadedness aside, The Sitter’s real problem is the formula’s resistance to wit. The odd one liner not withstanding, it relies on people getting punched in the balls and another set of ovoids being set alight to mine its laughs. Anything more sophisticated you feel, would alienate the hoards that have been so carefully considered in those story-breaking conferences. You’re left to wonder if anyone in the R-Rating department at any of the major studios will ever take a chance on cerebral humour, based on the iconoclastic idea that audiences are made up of individuals, and individuals, whatever their age, ethnicity or background, might enjoy smart one liners from smart characters.