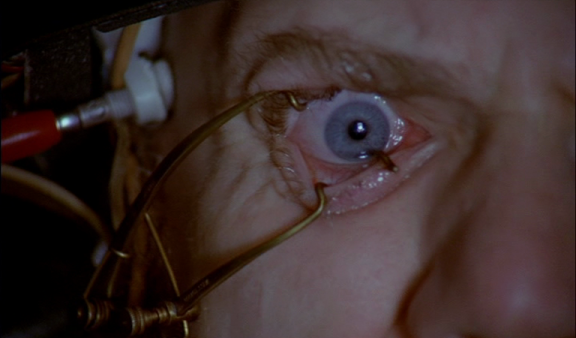 Was cinema kind to us in 2011? No. Cinema is an arts medium, it isn’t a person; it’s incapable of kindness. It was a stupid question for you to ask.

Let’s put that to one side and consider what was presented to audiences this year. The best, as we shall see, used nostalgia and nous to blunt any critical assaults. The worst showed such contempt for paying customers that the movies can be re-classified as acts of direct-to-brain violence. They were insults masquerading as entertainment. In this piece we’ll expose these cine-charlatans for what they are. We’ll have the last laugh.

In no particular order these are the five films that would have brought tears of joy to The Ooh Tray’s eyes in 2011, if it had eyes.

1.  We Need to Talk About Kevin

Lynne Ramsay, a Glaswegian, knows everything there is to know about misery and fatalism. Here she brings that cultural insight to this accomplished adaptation of Lionel Shriver’s nature versus nurture nightmare. It’s a masterclass in literary adaptation, ultiising cinema’s exclusive box of tricks to provocative effect. What the story loses in detail and background, it gains in immediacy and impact. More robust than any condom. Read the full review here.

Ryan Gosling’s mute machismo, er, drives this unashamed throwback to 80’s indie thrillers. Exuding nigh on illegal levels of intensity, he’s terrific as the stunt car driver who makes money on the side ferrying criminals to safety on the city streets. What he can’t get away from is love interest Carey Mulligan and her ex-con husband’s ties to some very nasty local hoods. Nicolas Winding Refn directs the kind of movie you used to see on Alex Cox’s Moviedrome strand twenty years ago. It’s a visual and aural feast, a series of unbearably fraught exchanges coupled with a synth score from yesteryear. Okay, you can dismiss it as an iteration of a style that defines an era long gone and wonder where the equivalent, bold take on genre’s going to come from in the tens, but there’s no denying that this is a hugely satisfying, sexy movie.

Not yet released in the UK, this is nevertheless one of the best efforts that made it into cinemas, any cinema, in 2011. Steve McQueen follows Hunger with Michael Fassbender again being put through the physical ringer, this time as a sex addict. It’s a mature, explicit exploration of psychosexual fuckery in which Fassbender and wayward sister Carey Mulligan (a great year for her all told), skate around incest and buried trauma. Were they both victims of childhood abuse? McQueen’s not telling but there’s something very nasty indeed driving the destructive instincts of both characters. Vividly photographed, beautifully played; this is difficult, engaging filmmaking from the top draw; that’s the one that holds your pornographic magazines. The pious and repressed will hate it; precisely why you shouldn’t. Read the full review here.

JJ Abrams channels the best part of Steven Spielberg in this valentine to his mentor’s movies of the late ’70s and ’80s. For all the charges of sentimentality and romanticism, Super 8 reminds us how much we miss Spielberg at the peak of his storytelling powers. Abrams’ evocation is so precise, so effortless, that it’s only the absence of a great John Williams score and the odd daub of hindsight that sends you hurtling back to Kansas. What makes it a great movie in its own right is the revival of classic values that the old wunderkind once used to such great effect; it has heart, a charming troupe of young characters and plenty of moxie behind the camera. Above all else, it’s a reminder of why so many contemporary blockbusters fall short. By comparison they seem cynical, one-dimensional and effects driven. In the summer of 2011 it was a joy to see the old balance of character and spectacle restored for one night only. For audiences in their late twenties and early thirties it was a chance to feel young again for two hours: a reminder of how good being young in the Amblin era was. Read a full review here.

That old provocateur, Lars Von Trier, was back with a film that made most of its headlines at Cannes, where the director sat next to an uncomfortable Kirsten Dunst and declared that Hitler had a few good ideas. Perhaps he was conscious that this movie has fewer headline grabbing controversies than Antichrist and needed a push, but said theatrics shouldn’t have deterred anyone; this was one of the most affecting films of the year; an end of the world drama that blindsided its audience with terrible beauty before going on to show unflinching human ugliness. A sensual and morose look at the human condition in its final days from the perspective of a manic depressive may not sound like a great night in the cinema but this was captivating stuff. From the hauntingly beautiful opening, set to Wagner’s Tristan und Isolde, to Dunst’s iconoclastic denunciation of material and class values and the contention that “life on Earth is evil” and deserving of its fate, Melancholia was both thoughtful and savage. Nihilistic, certainly, but it’s a certain view of life given forceful expression. It’s the contented that dismissed it that you feel have more cause to worry than Dunst and her doomed family.

2011 saw its fair share of film crimes. Here are five that really stuck in the gut.

Few vessels were emptier than Zack Snyder’s showy, wrongheaded, idiotic, conceptually confused, misogynist fantasy, marketed as an empowerment exercise for those of breast and vagina. Still, that didn’t stop hundreds of excitable fanboys, though tellingly few fangirls, taking to the Internet to tug the blindfold from pompous critics’ eyes. The movie may have been bunk but the fantastic interpretations projected onto it by those desperate to explain away guilty erections made secondary entertainment surpassing anything Snyder managed to provide. Proof, were it needed, that lapses in coherence, plot logic and ideological clarity, will always appeal to the worst instincts of those desperate to fan their peacock feathers, not least when there’s so little material that any interpretation has a chance of gaining some purchase. Give it up boys, it’s wanking material. Read David Frames worrying endorsement here.

Clint Eastwood’s insufferably dull spiritual drama subordinated its lifeless story of medium Matt Damon helping a few sad souls connect with their dead relatives in an unimaginative, English speaking heaven, to the demands of the film’s corporate backers. The story’s timeline became increasingly confused as anachronistic products from the present day began appearing in scenes allegedly set six years in the past. What, asked exasperated audiences, was going on? Was this 2005, 2010 or what? More importantly, when? Why didn’t the filmmakers care? Clint had no answers, in addition to no drama and no humour. All in all it was a film that made death lose its sting; perhaps that’s what Eastwood and writer Peter Morgan wanted, but not, surely, like this? A full review can be found here.

3. Season of the Witch

Nicolas Cage’s tax bill won’t pay itself and so, early in 2011, we were asked to do our bit with this action free slab of hokum, that saw medieval knight, Sir Venice Beach, or something, escorting a woman (correctly) accused of witchcraft, to more secure quarters. Ron Pearlman’s great one liner, “do you think God has too many enemies?”, coming on the back of a decade long battle montage, was the only moment of levity in an otherwise middling 95 minutes of schlock. That it was a back door vindication of religious persecution and a two fingered insult to enlightenment values only made it worse. Much worse. Read the full and terrifying review here.

Without a Clue without the jokes; this illiterate, cultural libel, saw Independence Day helmer Roland Emmerich re-imagine England’s Bard as an inebriated cockstand and charlatan who took the credit for The Earl of Oxford’s wordcraft. It was, we recorded, “the defenestration of one of England’s greatest dramatists by one of Germany’s poorest” and there’s little to add, except to say that conspiracy theorists don’t need any encouragement. The good news is that it culminates in a very funny line about incest; the bad news is that you have to sit through the first two hours to get to it. Read the longer review, and the line, here.

It could have been Bonnie and Clyde piggybacked on to a neat futuristic concept but Andrew Niccol’s treatment of this imperfect future where time has literally become money, is so laboured and thin that nothing survives; not the excitement of a couple on the run, not the pre-school analysis of economic inequality; nothing. The limits of a tight budget were very much in evidence in this bland, uniform future but a paucity of funds is no excuse for the deadening sense of lethargy felt throughout. The dullest movie of the year by a mile, In Time managed to make watching Amanda Seyfried boring, something hitherto thought to be impossible. Read more here, if you dare.

That was 2011, kids. Will next year be better or worse? Frankly, I don’t care just remember to keep quiet, face forward and turn off that fucking phone. No, really.

Tags: 2011, Best of, Film, Review, Worst of
Posted in Feature, Film | Comments Off on Five to savour, five to delete: 2011’s movie milestones