Film Review: The Girl with the Dragon Tattoo (2011) 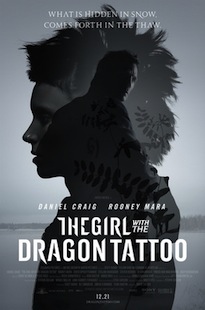 The Germans call it Schwedenkrimi, the British, Swedish Noir but in the Larsson household it’s simply unfortunate: unfortunate that the man who restored his homeland’s reputation as a fish rotting from the head down; a gloomy, filthy cesspool of perfidy, immorality and racism with ties to its Nazi past, never successfully flushed from the body politic; died before his novel Män som hatar kvinnor, Men Who Hate Women, (re-titled to kill migraines in the marketing department), became an international best seller and defined a genre. Still, at least those old badges of national pride, blonde porn and suicide, have been torn from the Swedish Blazer.

Here, at last, was a book we could all get behind, featuring lurid sexual violence, incest, fratricide and, most chillingly, emigration to Australia. Middle class professionals and punks alike took an interest. Prurience is the great leveller.

Indeed it’s been such a break out hit, sating a desire that no one knew existed for crime fiction featuring diligent journalists and disaffected, decorated, bi-sexual, autistic technonologists, that’s it’s been adapted into a movie twice in its short life; originally by Niels Arden Oplev in 2009 and now again, by David Fincher, in English, because Swedish movies, no matter how successful, don’t make a dime for American studios.

However, those hoping to hold Fincher’s adaptation up as an exemplar of US cultural vandalism will need to find another piñata to smash; this movie would have made an excellent submission, if it still existed, to the House of Un-American Activities. It’s a fully preserved anti-capitalist, anti-familial tract from the pen of a known communist. It’s every bit as Swedish as Oplev’s effort, those handsome leads aside: in fact, so at home is Fincher’s controlled camera in this cold, weatherbeat land, with every interior given a sinister aspect, that it seems the great mood musician of American cinema and this Nordic hellhole were made for each other. It’s a marriage of convenience to be sure, as the fuck big business, fuck the family unit undercurrent, soils the stars and stripes. It may seem courageous to stick with Larsson’s back yard but you could, were you more cynical than I, read it as cowardice.

Fincher’s argued correctly, if a touch defensively, that no one has a monopoly on adapting Larsson’s scribbling. Popular novels have thrown up multiple film versions for much of the time the two mediums have co-existed, and the logic of a Hollywood adaptation, for the benefit of a largely untapped domestic market, is clear, not least for the film’s corporate sponsors: step forward McDonalds and Apple, two brave companies who’ve tethered their brands to incest and murder. Now every time I look at my Macbook I want to rape something.

Watching a film that consciously eschews conspicuous Americanisation in search of credibility, you realise there’s seldom been a studio picture designed to hold so little appeal for the home crowd. If Columbia are hoping that international markets will make up the shortfall, they might have missed the fact that said territories have already parted with $106m watching the version released two years ago. This may be the best thriller in years that no one cares to see.

Larsson’s miserabilist readership will be delighted that Fincher retains the structuring metaphor of Sweden as a stone that once lifted, reveals a hiding place for tendrilled nastiness. He doesn’t flinch from the alleged feminist Stieg’s depiction of rape and sodomy, though Larsson’s revenge fantasy may want to be looked at with greater care. This is still a story that’s ultimately about a man saving two women from the deviance of other men. Blomkvist’s Daddy rides in to belatedly provide the promise of patriarchy to both the missing Harriet and ward of the state, Lisbeth. He fills the void in more ways than one.

If there was any doubt, both Fincher and screenwriter Zaillian consistently draw parallels between the two women in the story. Moa Garpendal, playing the missing girl, looks like Mara in several shots. Both women have had their natures violated by paragons of the state: the industrialist that helped to build the country on one hand (but whose company now recycle shit), the welfare representative on the other. Sisters aren’t doing it for themselves just yet, not in Larsson’s world.

There’s a European frankness about the sex, including polygamy and inter-generational fucking. We’re relieved to be spared the tiresome moralising that structures home grown American thrillers. The problem with the narrative, its pornographic zeal, occasionally stowing the penis to wag a finger, remains unsanitised (one resists using the term unmolested).

Yet, despite the brutality and the craft deployed in maintaining audience unrest – clinical edits, a camera that creeps up on the actors, and the one significant improvement on the Swedish film, ambient unnerving from Trent Reznor and Atticus Ross – Fincher’s film lacks realism, and the reason is as plain as the noses on two remarkable faces; it’s the importation of glam; it’s those handsome leads.

We shouldn’t denigrate the performances of Daniel Craig and Rooney Mara, because they both work hard. Craig, who has a seriousness about him, dutifully binged on gummy bears so he wouldn’t be so muscle bound and one imagines Fincher thought his face, with its cracks, canyons and Aryan blue eyes, would do the rest. Mara goes for broke – bleached eyebrows, pierced nipples (no clit alas) and a hideous fringe.  She’s every bit the poster girl for discontents. But both players have a problem; star quality.

Craig has an air of controlled machismo about him, a hint of invulnerability, making him a harder sell as a magazine journalist in an action free role. He’s the current James Bond for God’s sake; an association evoked from the off with a superbly produced title sequence – sloshing black lacquer and tortured faces, overlaid with Reznor and Karen O’s Immigrant Song cover. It plays like a nightmare entry in the 007 series. It’s a call back to the leading man’s other life that he didn’t need.

Mara, whose beauty cannot be disguised, despite the herculean efforts of wardrobe and makeup, has both the accent and the iciness off pat, but there are no rough edges to her characterisation. Noomi Rapace was suitably indelicate while managing to look permanently angry, projecting consistent evidence of emotional turmoil; she had a pained face. Somehow Mara fails to conjure the same arresting sense of inner conflict. Hers is a more studied, less involving Salander; there’s no pain behind those pretty eyes. The Swedish movie had actors; this one has stars.

Fincher perhaps, couldn’t win; he’s become ensnared by a catch-22 of his own making. He needs star power to sell the film but its inclusion blunts the movie’s edge. Barbed dialogue and great technique work hard to keep it sharp but it’s beyond the ability of editors, photographers and art directors: Craig and Mara, good as they are, weald a sander that’s never switched off. Fincher, as director, does nothing wrong and that, one imagines, will above all else make the fact that the finished product just falls short, that much more difficult to bear.