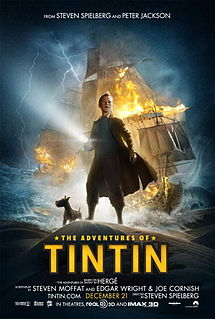 John Williams’ underpowered score is a reminder that both Spielberg and his long time collaborator may have waited too long. Both men are past their best. Spielberg can’t make these movies with the same exuberance and clarity any longer and his maestro, who once added 30% and millions of dollars worth of excitement, but is now adding nothing, is like a composer with dementia; rambling instrumentation, incoherent, lacking a single discernable melody; the composer of the Raiders March and Close Encounters, now sounds like a part of the same computer programme that renders the visuals; a machine trying to ape the old masters’ style. 30 years ago you’d have left the cinema humming the Tintin theme, instantly tethering the leitmotif that went with each character to them as you imagined their faces. In 2011 you’d be pushed to recall a single note.

It’s not a bad movie; it’s exciting in places, it’s fun; but a project so long in the tooth shouldn’t feel so breezy and inconsequential. Tintin was boys’ own adventure of the first order, but now the boys that enjoyed it have grown up and somehow made something less than the original. Are they too old? Too comfortable? Lacking Tintin’s hunger for adventure? We can’t know but it’s hard to avoid the conclusion that what the Belgian boy needed was a fresh pair of eyes and a run of film through the camera gate.