LFF Film Review: This Must Be the Place 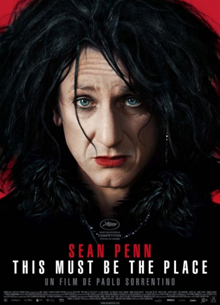 Robert Smith: Nazi Hunter, might have been an alternative title for this Goth road movie; a charming oddity patterned on the eccentric and, befitting the musical genre suggested by his red lipstick, black eyeliner and explosion of midnight hair, introspective persona of Sean Penn’s Cheyenne. A former frontman for a Cure type, new wave, post-punk Eighties outfit, he’s now in self-enforced retirement in Dublin. Later, in a confessional with Talking Heads frontman David Byrne, who both provides and performs the classic title track, we learn that two of Cheyenne’s fans took his call to self-pity seriously and embraced ultimate darkness. Any suggestion that the quality of the album was an issue is buried with them.

Cheyenne, consequently, is a walking time capsule; a middle aged man who’s yet to cast his off adolescent affectations. These holdovers include a broken relationship with his Jewish father (“he never loved me”) – a holocaust survivor, settled in New York, who succumbs to old age. So, having been introduced to the ex-Fellows frontman, adolescent angst personified, complete with slow moving gait, weedy, thin voice and stroke recovery speech pattern, we follow him across the Atlantic and become involved in the improbable completion of his father’s obsession, the hunt for a Nazi War criminal. This Must Be the Place becomes a journey with an eccentric comic sensibility; a sweet natured jaunt in which we get as lost in Penn’s character as he does.

Quite what Robert Smith will make of the movie’s backhanded compliment is anyone’s guess – it practically screams “grow up!” at him, but imitation, as well as being the highest, not to mention, least imaginative form of flattery, neatly provides a musical reference point for a career we never see. Cheyenne’s name, which we infer is self-branding, links the son with his estranged Dad. Evoking the Native American people, the victims of genocide, Cheyenne becomes the child of one slain tribe traversing the land of another, Michigan, in the adopted name of the natives – an unlikely avenger.

Penn’s odyssey takes few liberties with the road movie formula. He meets a series of personalities, most fleetingly; tokens of surprise and enlightenment for the lost singer. Sorrentino underplays the fish out of water aspect, a welcome rejection of the obvious. Despite Cheyenne’s alien appearance, a contrast with the colourful plains that populate half the movie, he moves mostly unnoticed throughout the American Midwest. The one person who does recognise him, a fan in a shopping mall car park, is dismissed with a bogus claim of mistaken identity. The matter of factness and concentration on Penn’s persona as troubled and fragile, rather than ridiculous or outlandish, gives the movie a sense of pathos that it might otherwise have lacked. There’s beauty in the photography and in the storytelling; a film that ultimately looks outward and forward, despite its protagonist’s initial preoccupation with himself and the past.