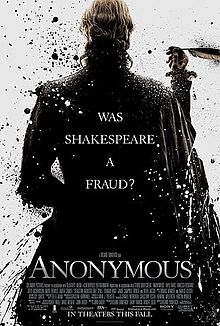 Much Ado About Nothing

Anonymous may focus on William Shakespeare (1564-1616) but John Orloff’s sub-literate plot is patterned on a contemporary scribe, 21st century bard Dan Brown. It quadruples as a posthumous libel, hey nonny nonny Royal Court soap opera, Elizabethan caricature and a backhanded celebration of incest. Emmerich, who keeps tripping over the tone dial, has fashioned a film both straight faced and ridiculous, a tale of bastards, in the classic sense, and bastards. I know, sounds good, doesn’t it? However I urge you to re-stow your quill and return that skull to the loft: this is a remake of the 1988 Sherlock Holmes comedy, Without a Clue, without the jokes.

Now, as then, the plot turns on the notion that a celebrated genius was in truth, a ventriloquist’s dummy. Just as Michael Caine’s Holmes was a hollow-skulled soak with a taste for the boards and the broads, Rafe Spall’s Shakespeare is equally steeped in vice and bullshit. Of course The Bard, the one and only, with apologies to misguided Scottish readers, was, before he became a set of atoms that we’ve all breathed in from time to time, flesh and blood, not a homo fictus, and consequently you wouldn’t be human if you didn’t worry about his portrayal as an imbecilic, murderous, semi-literate hardon.

Stratford Upon Avon’s favourite son is, for Emmerich, a footnote in the story of Edward De Vere (1550-1604), The Earl of Oxford, played by Rhys Ifans in the Ben Kingsley/Doctor Watson role. The Earl, shown first as an awkward child actor, then a young buck, and finally the aloof patrician, is forced to hide his literary endeavours because of his puritan upbringing; Puritanism imagining art as sin, in the days before ITV2 took over.

The Earl’s position isn’t conducive to crafting satirical barbs aimed at the establishment and so the motherload is handed to fellow scribe Ben Jonson (1572-1637) who is instructed to pass them off as his own. Jonson however, shunning the limelight, decides instead to hire Shakespeare to take the bows, and so begins Roland Emmerich’s act of cultural vandalism; the defenestration of one of England’s greatest dramatists by one of Germany’s poorest.

It may be ahistorical to a frame, but Emmerich’s film isn’t a total hunchback. Despite being composed of lifeless exchanges intercut with admittedly impressive CG renderings of late 16th century London, it remains watchable due to a dramatis personae played, in part, by Vanessa Redgrave, daughter Joely Richardson, playing a younger version of the same character, and a scheming David Thewlis. They’re not directed as such, merely told where to stand and get on with it, but such wise casting gives the material a lift. Just don’t imagine the director had anything to do with it.

Emmerich, perhaps conscious that the olde worlde drama required greater subtlety than his disaster flicks, reigns in the excess, but between you and I, it’s missed. Conscious that this isn’t a serious treatment of history (let’s give him a Ryal’s worth of credit), the odd flourish, in composition, in performance, might have added life to the German’s ruff and musket movie. Instead, for much of the running time, bookended by fellow conspiracy nut, Derek Jacobi’s solemn narration, it exudes a seriousness out of step with its airport novel premise. There’s levity, some of it unwelcome, like Shakespeare’s crowd surfing, some of it very welcome, like the line “you never know with the Tudors”, which when heard in context is hilarious. But it’s the defamed Bard, turning in his grave at Spall’s performance, who sums it up best: “done to death by slanderous tongue”.

Certificate: 12A for posthumous libel, cultural vandalism and profound stupidity.