All You Need Is…

These days, $500,000 isn’t a lot of money. It’ll buy you a pretty nice house with enough spare change to get the Magnet team in to spruce up your kitchen; a Mercedes McLaren SLR and enough gas to (maybe) get it home from the forecourt; a half-decent midfielder to drive the local footballing minnows to fortune and glory; a nuclear device from an impoverished ex-Soviet state.

All very good options, I’m sure you agree, but they pale in comparison to the path taken by Tom DeLonge of Angels and Airwaves and blink-182 fame. Finding the aforementioned half-million threatening to loosen the pockets of his skinny jeans, the rocker parcelled up all those used notes and passed them to a first-time director by the name of William Eubank. The result is Love – a small epic of science fiction that bears comparison to the work of Kubrick, Aronofsky, and Malick. That atomic warhead doesn’t seem quite so appealing now, right?

Set in 2039, Love follows astronaut Lee Miller (the memorably-monickered Gunner Wright) during his time aboard the International Space Station on a solitary mission. Approaching the end of his rotation, Miller’s life in space is one of diligently-performed routines interrupted by occasional messages from Earth. But, after the lights of the world below flash, flicker, and fade into darkness and the transmissions from Mission Control cease, Miller finds himself trapped and isolated in the vastness of space. 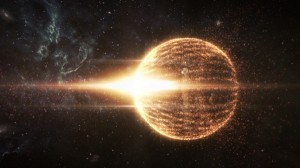 From here, Eubank – who also takes up the roles of screenwriter, cinematographer and production designer – embarks, in much the same manner as Duncan Jones’ Moon, on an examination of the physical and mental effects of abject loneliness and the fundamental human need for social contact. As minutes, hours, days, weeks and years blur together in the artificial light of the ISS, Miller’s grip on reality gradually, understandably, falters, allowing Eubank to utilise an array of stylistic tricks, filmic references, and skilful editing to reflect his lead’s mental state.

From the Solaris-esque hallucinations birthed from Miller finding Polaroids of the ISS’s previous crew, to his use of tattoos to mark the passage of time as in The Fountain, through an overarching MacGuffin plucked straight from 2001: A Space Odyssey, Love is packed with references to iconic sci-fi. Thankfully, Eubank’s assured, visually striking direction and Wright’s nuanced performance elevates what could have amounted to little more than low-budget fan-service into a memorable addition to the lonely cosmonaut subgenre.

Indeed, one of the most impressive techniques utilised by Eubank is also one of the simplest. As time progresses, the interior of the ISS comes to provide a visual representation of Miller’s mind – the pristine pale walls gradually covered by cryptic scrawling; the portholes that once held Earth blotted out by strange runes and lent an otherworldly glow by the ambient light; the narrow gangways carpeted by creeping litter and debris. It’s an elegant and visually arresting technique that represents, alongside Miller’s tattoos, Man’s need to document his existence, as well as an effective means of transmitting the doomed astronaut’s gradually loosening grip on reality. 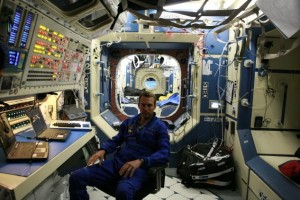 Couple this with Wright’s performance, skilfully portraying Miller’s descent from all-American space-jock to a lost soul skirting the edges of sanity, and the result is a fascinating representation of the fragility of the human mind. It’s this, Miller’s battle to retain some sense of reality, that forms the emotional core of Eubank’s film, with the snatches of lucidity that punctuate even his darkest moments granting Love some of its most emotional scenes. As one of his hallucinations – an extension of his own psyche – asks him ‘does it bother you that we’re not real,’ it becomes clear that Miller is so hungry for social interaction that his conscious mind is willing to tolerate the creation of these ‘ghosts.’

Indeed, this notion – of the fusing of the real and unreal – permeates Love, with Eubank’s ambiguous scripting and direction leaving many unanswered questions and possible interpretations. Indeed, the majority of the film could be viewed as nothing more than the fever-dream of Miller’s damaged mind, yearning for both purpose and social contact. Further complicating matters is his finding of a Civil War-era diary aboard the ISS.

The journal’s tale, which frames Miller’s narrative, is that of Confederate Captain Lee Briggs’ (Bradley Horne) escape from a doomed fort and subsequent search for a mysterious artefact. It’s these segments, which couple poetic voiceover with some unforgettable imagery, that cement the notion that Eubank might just prove to be a cinematic force in the near future. 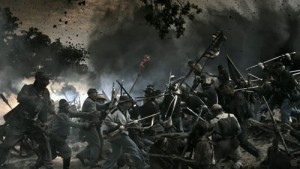 While Briggs poses existential quandaries in his lazy Southern drawl as the world around him burns and shakes, Eubank frames some extraordinary images. The slow-motion clash of two armies as the world around them erupts in a tumult of earth and shrapnel; the symbolic intercutting of the clods thrown up by a horse’s galloping hooves and those churned by artillery shells; the close-up, lingering shots of the faces of men awaiting their doom, dirt and blood ingrained in their skin. That these sequences are best described as playing out like an 19th century re-envisioning of The Thin Red Line goes some way to relating their effectiveness.

Still, that’s not to say Eubank has crafted a perfect debut. Despite a lean running time, Love loses its way in the final quarter, with Eubank struggling to bring the disparate narrative strands of the piece together to create a thematic whole. Likewise, the inclusion of documentary-style interview segments dealing with the lofty themes of love, loss, social interaction and the importance of recorded history, while occasionally touching, jar in tone with the rest of the film and detract from the wonderfully maintained sense of isolation.

Similarly, after building layers of ambiguity, posing deep, personal questions on the nature of an existence devoid of social interaction, and refusing to offer any easy answers, Eubank’s nerve breaks in the final reel, with Love attempting to explain, with no small measure of pretension and patronisation, the ‘meaning’ of the previous hour and a half.

Nevertheless, the sheer ambition, breathtaking visual style, and assured direction on display renders Love a worthy addition to the burgeoning lonely cosmonaut subgenre, and marks Eubank as a director with a frightening degree of potential. Indeed, it’s hard not to be impressed when he offers up a near-perfect imitation of the ISS built on a driveway out of washing machine parts and Home Depot cast-offs, or a Civil War fort recreated with nothing but a neighbour’s JCB and a few old oaks. Just imagine what he could have done had DeLonge found a spare $1 million stuffed in his artfully frayed denims…