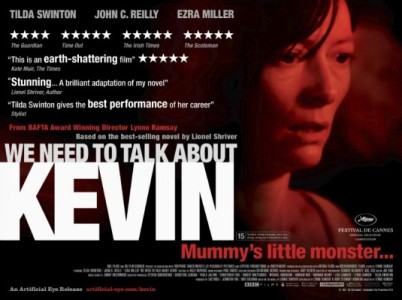 The montage is equally unnerving. A look down the plughole to the motor of a garbage disposal unit signals the fate of a missing pet. A moment later Swinton, the discoverer of this horrific find, now in the present, is washing scarlet paint from her hands in the sink. It’s the kind of sudden, visceral association, purely cinematic, that gives the film the status of a waking nightmare. Red, by that point, is a colour we’ve come to dread, having seen both it and its referent in scene after scene; Eva soaked in blood red tomatoes, Eva sitting on crimson chairs, Eva rolling a wine coloured ball to her silent, shark eyed toddler. There’s no violence, yet each composition alludes to it; Johnny Greenwood’s sociopathic strings underline it. This is the most malevolent movie in years.

The nature versus nurture question remains open, as it did in the novel, with Ramsay teasing out the themes with great clarity. Kevin is a difficult child from the off, a baby that screams, a toddler that’s mute, a young boy that refuses to be toilet trained because it would cede to his mother’s authority. It’s hard for our sympathies not to lie with Swinton; we share in her defeat, we feel her frustration when a Doctor casually announces that there’s nothing wrong with the boy, yet a handful of scenes invite us to consider parallels between mother and son. They’re coded to look like each other for a start – jet black hair and eyes, Swinton’s masculine haircut; her face briefly morphs into his when dunked in the sink; her happy, hedonist lifestyle, before becoming pregnant, is contrasted with a notable lack of maternal instinct following a difficult, painful birth. No one could blame her for ambivalent feelings toward Kevin, he’s a malicious, hateful brat, no one that is, except him. Working out if there’s any substance to that grievance and whether Eva is right to feel responsible, is the question that menaces throughout.

We Need to Talk About Kevin is an exceptional film, anchored by two unsettling performances from Tilda Swinton and Ezra Miller. Both exude intensity, and the aural and visual technique employed in augmenting said performances is equally as focused. The sobbing, barely audible, belongs to Alice Sebold, who’ll have watched this confirmation of Lynne Ramsay’s prestigious talent and wondered what she might of have made of The Lovely Bones had the Glaswegian not been beaten to the punch by Peter Jackson. Talk about a tragedy.