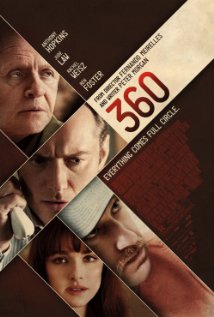 Ships that Pass in the Night

The 55th London Film Festival opens with this holistic view of social and sexual intercourse. The thesis, reaching for profundity but never quite making it, is an intimate take on the six degrees of separation myth, the idea that despite the vast space that separates people, that’s geographical and economic, we’re all part of an interrelated system. Literally, that may be bunk, but it’s an endearing philosophy. At a time when many of us have never felt more alone, atomisation an apparently unstoppable trend, here’s the bigger picture; life rendered with an order and connectivity that only movies can provide.

Screenwriter Peter Morgan’s linking agent is sex, though there are no homosexuals on Planet Movie. Taking his cue from Arthur Schnitzler’s 1900 play La Ronde, he has Anthony Hopkins tell us that fucking is “the prayer of release and assembly” and sure enough it’s used to collapse geography and bring characters together. Meirelles’ film grammar is up to the task; transitions between place and person are handled with concision and elegance – locations bleed into one another, screens are split, bodies and monitors are used as wipes, while the editing foreshortens distance with equal vigour. One scene has Brazillian photographer Rui transgress London’s busy underground system in a few rapid cuts. This of course, is why film is better than life.

Morgan retains, in part, the Viennese setting of Schnitzler’s play, but broadens the scope, acknowledging the shrunken geography and international flavour that characterises the social world of the 21st century. Characters are forever in transit – on the road, at the airport, in the car, on the plane; the film takes you half way across the globe and back, stopping off in London, Paris and Denver, yet it’s organic, rather than transport connections that predominate.

Screen time is broken up and shared between several pairs of interwoven characters. Consequently many are never more than sketches, some more involving than others. Hopkins, travelling to Arizona to identify a body that may belong to his missing daughter makes a great deal of impact in a handful of understated exchanges; so too Ben Foster as a newly released sex offender bumming around Denver airport. Many of the other parts feel underwritten by comparison. Perhaps this is inevitable in an ensemble piece but the effect is an uneven film; something like a game of movie consequences. There’s the sense that the filmmakers are more interested in the formal connections between the characters than the characters themselves. This is a movie in love with its own architecture despite said design venting drama, like a house that loses heat.

Fernando Meirelles judges tone and style rather well; it’s an assured, for the most part understated picture, underpinned by emotional and psychological realism, yet this is all he can do to inject some semblance of relevance into the piece. He’s in part hampered by the incidental nature of each crossover, in and of themselves interesting vignettes but otherwise slight, and Morgan’s inclination toward starving the screenplay of ambiguity.

Metaphors are displayed in neon. Bookending narration tells us that the film is about forks in the road, choices that put us on a path to certain encounters, as though an audience were incapable of deducing such a thing from the line of action; indeed one character, having driven another around a Viennese ring road, as the end beckons, even says ‘we have come full circle’. All that’s missing, you feel, is a scene in which a member of the cast breaks the forth wall and proclaims ‘this is a parable. Pa-ra-ble’.