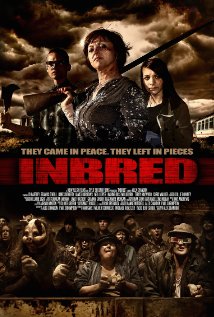 When you imagine Yorkshire and its contribution to British cultural life, you may think of William Wilberforce, Charlotte Brontë or Hayley Longster. Alex Chandon however, a North Londoner, brings an altogether more bigoted perspective to his tale of Southern delinquents and their care workers, besieged by a village of degenerate lads and lassies.

As you wade through this technically proficient but deeply depressing one joke movie, a sort of Straw Dogs for the mentally retarded, an awful thought crowns. Could a critical faculty, pregnant with self-importance, miss the point? Is this, in fact, a timely and provocative satire exploring the social consequences of a depleted northern economy and the resulting brain drain to the south? Is Chandon the new Swift?

Well, no, no and no. In fact, beyond a narrow constituency of guffawing metrosexuals, it’s hard to imagine who this is for. Know this: you wouldn’t want to meet them.

At FrightFest, with the festival acting as midwife to a stillbirth, the row behind me had the night of their lives. They roared with laughter. They clapped. They shouted “get in!”, as characters were brutalised. They sang along with the buck toothed locals on-screen. This, however, was the row reserved for the cast and their friends.

Notably quieter were the paying customers; poor fools who hadn’t had the foresight to be in the film and so couldn’t enjoy watching themselves; who’d seen Northern comedians revel in the region’s dark comedic sensibility without the condescension, in superior fare like The League of Gentleman and Psychoville, and lamented this knock off’s witlessness.

Inbred is a terrible movie. It boils over with hate. It’s offensively obvious. The troupe of victims, wasted youth for the most part but still cultural colossi when stacked against these racist, goat burning, bestial porn-loving bumpkins, do a fine job of registering suitable panic as their numbers dwindle, but the fear fails to cross over, not least because they’re on the run from a set of cartoon characters; caricatures so broad that they overshoot comedy completely.

Chandon, you sense, saw this review coming. He had a copy of the likely criticisms stapled to the shooting script. Consequently the film opens with an attempt to pre-empt them. In the prologue, a film within the film, a couple of upper class clichés are murdered by an axe swinging northern servant who doesn’t care for their imperiousness. ‘Look,’ says Chandon, ‘I do inverted snobbery as well as classic’. It’s a half-hearted apology for what follows and unlikely to be accepted by anyone north of Milton Keynes.

Certificate: 18 for regional cliches and witlessness.