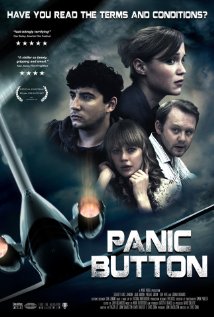 Warning: This review discusses the plot in some detail.

Here’s a cautionary tale about cautionary tales. Beware any movie that’s billed as capturing the zeitgeist. This is an honour that’s usually awarded by audiences after the fact, it’s not something that’s easily manufactured. The key is not to be too literal. Aaron Sorkin pitched The Social Network at a human level. The fictive Mark Zuckerberg embodied hubris and a technocentric view of life that neglected less profitable, but more essential commodities like social literacy and friendship. You didn’t need a sound bite from a PR company to know that this was timely stuff; the treatment however, was timeless.

Panic Button is the opposite experience; it’s a movie about nothing with zeitgeist pretensions. Thrillers cherry pick from life to provide their hooks, no problem there, and exaggeration makes the underlining inspiration more apparent, but when the set up’s this absurd the gimmick becomes meaningless. The film wants you to think about the pitfalls of information sharing and online exposure but it warns you off with a fantasy consequence. It’s like been told that given a certain set of circumstances a bee sting could cause your body to implode. There may be many legitimate reasons to fear bees, anaphylaxis perhaps, but full body implosion isn’t one of them.

We’re asked to park our doubts about a millionaire who’s lured four twenty somethings onto a plane, under the guise of flying them to New York as competition winners, only to force them to play a sadistic game based on their irresponsible use of a popular web site. Once humiliated, the game turns to murder and finally, dispiritingly, into a cartoon version of United 93.

Had director Chris Crow thrown out the schlock and the sadism he wouldn’t have a movie of course; he wanted to torture some audience proxies and leave them feeling uneasy about their online lives, but hypocrites though we are, we’re entitled to ask a few questions of our own. The mad man responsible might have lost a daughter to a streamed suicide, but wouldn’t the requirement to be responsible online extend to her? Surely, there’s something fundamentally wrong with a person who wants to broadcast their demise? A little derision sounds like a healthy reaction to me. Isn’t information sharing by and large a positive thing? Hasn’t it brought people together? There’s hardly a mode of communication that isn’t vulnerable to abuse but there’s something crass about a movie that tries to snare an audience with its hi-tech credentials only to turn Luddite once you’ve bought your ticket.

The premise is junk but maybe Crow knows it and consequently it soon becomes another rat in a cage movie, in which the characters live and die at the behest of a sanctimonious, self-righteous psychotic who’s gone to an inordinate amount of trouble to kill a set of characters he could have dispatched with a bomb in the waiting lounge. But no, he had to make his point. What is it? That the restraint we apply to our social world should extend to the internet.

Wasn’t the web supposed to liberate us from those constraints? Isn’t it merely an extension of the secret life that every person’s possessed, if only in their own mind, since time immemorial? Maybe, but you’re asked to forget about that and enjoy the unpleasantness.

Ironically, given that it’s a film about information sharing, not quite enough is conveyed about the captives to round them out. Crow sustains enough tension within the confines of the plane cabin to sustain interest, but long before it’s over, doubts about the premise have diffused any tension. 95 minutes on Facebook might be more fun.