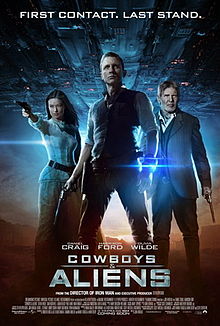 Warning: This review discusses the plot

What did you see when you looked into the trout eyes of John Favreau’s aliens? Formidable monsters? I saw only suckers; space prospectors who were sold a lemon by their species’ equivalent of a wizened old barfly with a missing tooth, trading stories about undiscovered gold mines for a few hundred spacebucks.

Perhaps he told them to go to California, neglecting to say that they’d missed the rush by 20 years. Instead they end up in New Mexico, perhaps due to an error in navigation, desperate and reduced to melting down pocket watches and gold coins. The scant nuggets in the hills won’t cover the cost of a fifty million mile journey.

What about the pests known indigenously as humans? Flies seldom hoard precious metals but the visitors feel compelled to waste time and resources capturing and dissecting them. If the original Forty Niners had put down their pans and concentrated on collecting bugs, they’d have remained poor men but the aliens’ superior tech doesn’t serve superior logic. “You’re nothing to them,” pretty Olivia Wilde tells the cowpokes, but whoever wrote that line hadn’t consulted the other four writers; half the town has been abducted already.

Cowboys & Aliens is a glossy b-movie and b-movies can be impossible objects, that’s part of their charm. What’s interesting about this one, however, is its mirroring of chief protagonist Daniel Craig’s identity crisis. Like the amnesiac gunslinger, this photochemical bastard child seems to have lost its sense of self. Its deathly serious about something, but what? The story yields no clues. Did Favreau think he was making Unforgiven? When did fun become passé?

The decision to keep it grounded isn’t unwelcome; camp is over exposed, but surely there was room for style, a little black humour perhaps? Craig is such an intense leading man; a pair of Siamese cat eyes the centrepiece of his craggy puss, that his casting makes levity a bad bet – they’re oil and water, cowboys and aliens, but it wouldn’t hurt to keep the threat alive.

This is bone-dry fare, you can practically brush the dust from your lips afterwards. The attitude recalls classic Westerns; tough, hard-edged and simple, the good guys versus the bad (though there’s no room for the ugly in this revival). Strength of character and rough justice is once again at the fore. Revisionism doesn’t get a look in. Yet it’s all aimless and empty. It’s not a movie about anything.

That it doesn’t quite work isn’t a by-product of genre mixing; there’s no reason why the two can’t be crossbred, it’s bad writing that’s toxic to this hybrid. These aliens are given a motive to meddle in human affairs that doesn’t make sense; we learn they’re tapping a resource that no one knew existed, suggesting that could have got on with it without interruption had they not drawn attention to themselves. They’re never at the forefront of the story, instead we’re left in the company of humans whose motives are clear but whose characters are never greater than those motives. Who’d have thought that Indiana Jones and James Bond could be such middling company?

The cowboys want their stolen townsfolk back, but why? Harrison Ford’s son, plucked from the movie by a hi-tech lasso, is a weasel-minded wretch. He’s a disappointment to his alpha male Dad but did Dollarhyde senior expect anything other than a whiny, shrieking violet after naming his boy Percy? Hasn’t he heard of nominative determinism? If the character is a let down then so is the sight of Paul Dano playing him. When Dano signed on as the feckless preacher in There Will Be Blood, did he realise he was setting the template for his career? It’s as if they’re writing these parts for him now.

The other abductees, a dutiful wife, a stoic Sheriff with a young grandson, turn this into another of Hollywood’s dreaded family restoration exercises. If we’d spent more time with them prior to their kidnap then perhaps we’d care more, but we didn’t and we don’t. A From Dusk Till Dawn half-time switcharoo might have improved things, giving the western and its human characters time to bed down and move toward some kind of dramatic crescendo before the aliens changed everything. Then at least we might have worried about them. As it is we’re left with more Maguffins than characters and not a joke to sustain us, Wilde’s fireside confession notwithstanding. The toll on repeat viewings will be considerable.