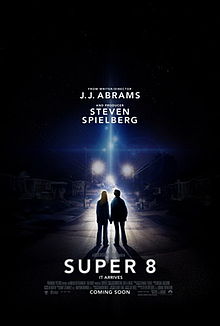 Super 8’s uncanny aspect derives from its note perfect evocation of period. Not the real 1979 you understand, or even the 1970s, but the era of the early blockbuster; stories that dealt with threats to childhood innocence like family breakdown, home repossession; all those by-products of adult cynicism, selfishness and perfidy, by liberating the childhood characters and their proxies in the audience with fantastic situations.

Ultimately the optimism and savvy of the kids would triumph, reminding those arbiters of lost innocence – usually squabbling or jaded adults, what was important. Watching these films you could never imagine becoming those parents and you didn’t want to; the world belonged to its kids and their wide-eyed worldview.

Abrams film, a valentine to Steven Spielberg and a remembrance of childhood particular to him, recalls the sweetness and sentimentality of his early work. It’s uncanny because that innocent outlook, so influential for its doting audience, became part of the mental furniture for that cohort of moviegoers. Consequently, watching Super 8, with its adopted technique, emotional register and perspective, must be close to how you’d feel walking into a near perfect recreation of your childhood bedroom.

Such a set would inevitably carry mixed feelings, after all you’d know it was an illusion, that you were still in your thirties and that beyond the threshold she still wanted a divorce, but there you’d be, back amongst your old toys, single bed and ZX-81 with its rubber keys and peripheral tape recorder. You watch the movie with that discombobulating sense; you wonder if you can cast aside the intervening decades and embrace it.

Would J.J Abrams, at 45, have anticipated this tension? Maybe. He’s about the same age, or a fraction older than his target audience and occasionally he acknowledges them in the movie’s few missteps; instances of retro-grandstanding that feel intrusive. These are insights from another time; the use of the era’s best known pop tunes, the gas station attendant that describes his new Walkman to the luddite Sheriff; all good fun but focus pulls to the present, like getting an e-mail on your phone while standing in that childhood bedroom. Super 8 made in 1979 would be indifferent to these details. The pleasure, looking back, is that we’re acutely aware of them; the filmmaker has no need to use a laser pointer.

Beyond that there’s little evidence of the here and now and nothing to suggest this doesn’t belong with its stablemates in the Amblin archive, bar its period setting pre-dating the company’s existence by two years. The use of CGI and an unmemorable, if reassuringly familiar score, might be construed as anachronistic, the latter being the quintessential “character” that doesn’t show, but this is a contemporary picture, no matter how much we might wish to pretend otherwise, and so it’s likely, if avoidable, that frames should be stained with the bleed from modern filmmaking practices; developments that might have given a young Spielberg pause.

That they don’t detract from the overall effect is symptomatic of Abrams investment in blockbuster elements that are no longer fashionable – character moments, story complications. These are the things we remember, so it’s appropriate that something that exists for nostalgic purposes should be imbued with a surfeit of memorable scenes; a superb, somber opening shot of the “days without an accident” board at the town’s factory being revised to “1”, a spectacular train crash, Joe Courtney’s boy hero letting go of his dead mother’s locket – the human story and the spectacle working with each other rather than in opposition; this is the cinema of 1970’s youth.

Its detractors will say that many of these scenes work because they remind us of older movies, but you can write that off as genre blindness. This is a piece of esoterica, specific to a single director, but more than a mix tape; Abrams picks up Spielberg’s favourite guitar and thrums out his own tune, just in the same key. Super 8 had to have heart of its own to work and it does. It provides its own thrills. That marks the difference between complimenting a set of films and copying them.