Film Review: Hobo with a Shotgun 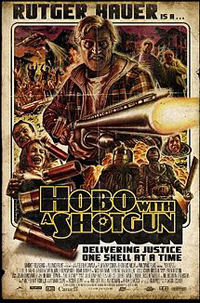 Neo-exploitation returns to the 21st century grindhouse in Jason Eisener’s bout of vagrant violence; a period theatre of death or, if you want to be positive, a safety valve for a damaged id.

Success for a film of this kind can’t be measured against broad criteria; such terms of reference intellectualise the sensation – nausea, surprise, disgust, arousal; the movie’s raw material. You couldn’t write a novel about a wank, though you can be sure Will Self’s foreword would be worth a read; a food critic wouldn’t waste adjectives on roughage. This is wilfully illiterate, Estuary English filmmaking; the kind people associate with, like the human equivalent, to show they’ve got an earthy sense of humour and a healthy lack of pretension. They don’t and they haven’t of course, but we’re idealised versions of ourselves in the cinema – it sells our fantasies back to us.

Hobo with a Shotgun hardly needs to be reviewed then, so why bother? You already know everything about it. You know it’s brutal and nihilistic, a film that hates itself and all its characters; a film that can’t resist picking its own scabs. Yet Eisener’s film is a copy; a conscious throwback to a time informed by different imperatives, and consequently we can spend a little more time on it.

Of all the Grindhouse revivals from frenzied Tarantinoids, Hobo is the most successful. The reason is simple; it’s a perfect exploitation copy, perfect down to the synthesised notes, the askew close ups, the garish techincolor and the low-rent violence. The present day doesn’t intrude. Post modernism is the real killer in this world; nothing murders the joke like deconstructing it, unless, a la Stewart Lee, that is the joke, and so we’re grateful to Eisener; in his head it’s 1988 and the anesthetised, socially conscientious world of the modern action movie can blow its own brains out.

Still, there’s no denying the truth; Eisener lives with us in 2011; he’s not an original rebel. He’s got nothing to kick against; the Hays code is long dead and the grave saturated in director’s urine, nothing to do there. We’ve seen it all and heard it all; we’ve even broken through the offence barrier. Sure, you can have an exploitation flick without a moral panic and a ban by the local council, but where’s the fun in that?

So Hobo with a Shotgun is a wonderful tribute, indistinguishable from the genuine article, but what it misses is the spontaneity, the listlessness; a lack of self-awareness that makes the cornball gags authentically kitsch or the girl-hate cultural, rather than laid on. You suspect John Davies wrote the line “you’re here to sell your hole”, then went home and profusely apologised to his girlfriend. No problem there, but when a movie’s a series of affectations is it still that movie, or is it something else entirely?

Knock offs are safe because you can handle them without risk. Eisener’s film packages the old tropes perfectly; it’s Reagan’s America, urban decay; it’s tits and gore, a giant octopus and a lot of fun; shock so far removed from its original context as to be inoffensive. Just one thought though; was that the point?