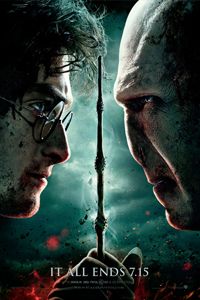 ‘Words are, in my not-so-humble opinion, our most inexhaustible source of magic. Capable of both inflicting injury, and remedying it.’

Warning: There are a lot of spoilers in this review if you haven’t already read the books.

The headlining quote from Albus Dumbledore (Michael Gambon) touches upon the issues that a reviewer could raise in relation to this epic installment of a story which has followed us since 2001. The book of the same title was a delight to read, full of unpredictable twists and revelations which have been saved till last for a decade, and can only emphasise the power words can have upon a human being. Three quarters of the way through the film, from Severus Snape’s (Alan Rickman) perspective, the audience are rewarded with flashbacks from the past seven years at Hogwarts, when it is finally revealed that Snape was in love with Harry’s (Daniel Radcliffe) mother Lily, and actually always vowed to protect The Boy Who Lived. Such a twist within the novel was an eye-widening discovery, and having read the books numerous times myself, could only hope that the interpretation of this scene would justify J K Rowling’s spellbinding narrative. As the quote says, words are capable of injury and remedy, and in this case, the excess dialogue sometimes interrupted the spectacle on the screen.

Harry Potter and the Deathly Hallows Part 1 suggested an intensified build up to a legendary battle that would see the magnificent towering Hogwarts come crumbling down. The beginning of Part 2 jumps straight back into that concept without warning; Lord Voldemort (Ralph Fiennes) takes the Elder wand – one of the Deathly Hallows – from Dumbledore’s grave, and the scene cuts back to the cottage by the sea where Harry, Ron (Rupert Grint) and Hermione (Emma Watson) are staying after the death of Dobby. Audience members who had not seen the previous film will of course be confused with no introduction, however it is fully explained what the characters are searching for throughout, meaning that those who have not read the book will not be at a disadvantage, despite the film not including a few of the minor characters and events.

The film primarily focuses on obtaining the last few horcruxes; a goblet, a diadem, a snake, and the final piece, within Harry himself, which Voldemort never meant to make. Visually this last film is stunning, and it is easy to make comparisons to the predecessors. It is a shame that the creativity and techniques within the production of the previous films has not been continuous; it appears that as the actors have grown, so has the quality of the films. Even the ghosts are different in contrast to The Philosopher’s Stone (2001), and there are no more shouts of ‘Expelliamus!’, as the characters have learned to cast spells in their heads. The scene in which Harry enters the vault of Bellatrix Lestrange (Helena Bonham Carter) is mesmerising, as the production team have created thousands of objects to fill it, not to mention the Room of Requirement, a maze of meaningless objects right up to the ceiling.

The films have undoubtedly become darker towards the end of the franchise, and parents should be warned that in this last one there are a couple of violent scenes that may scare children; particularly towards the end when the action is fast paced. On the other hand, the risk Yates has taken of portraying this film as more violent than the rest may excite dedicated fans, as it creates a greater sense of fear for audiences, and feels as though the film has matured as well as the main trio. David Yates has done a fantastic job as director of four of the films, and Steve Kloves, who has been the screen writer for all of the films apart from Order of the Pheonix (2007), has provided entertainment and a moving script for the actors since the beginning, giving a realistic portrayal of the characters and their personalities. Returning to cinematography is Eduardo Serra, and Alexandre Desplat has continued within the second part to provide a chilling score to really add anxiety to this dramatic second half.

The production team may not have given much attention to all the details from the novel, but they have established the key scenes and composed spectacular images, such as the Gringott’s bank scene, in which Harry, Ron and Hermione use the bank’s dragon to escape, and the CGI work on the goblin character of Griphook (Warwick Davis) who’s eyes are piercing and hauntingly black in the close ups. Those who have read the books know the ending to the adventure, and Desplat contributes considerably to the climax by increasing the score’s pitch as Harry and Voldemort finally confront each other for the last time, a period which can feel a little stretched.

With every battle there must be losses, but unfortunately the peril of the other characters, particularly those within the Order, is not central to the plot as it is in the novel. Even so, the slow motion of the camera when we finally do pan over the deceased is another reminder of how far Harry Potter has really come. There are stand out performances from Professor McGonagall (Maggie Smith) and Molly Weasley (Julie Walters) who both have numerous comical lines amongst other more serious and threatening instances (‘Not my daughter, you bitch!’), which was a particular favourite amongst audiences as she is usually quite a well-mannered woman. Other performances to praise are of course Rupert Grint and Emma Watson, who finally share a passionate kiss, which Grint has described, “couldn’t have felt more wrong to do”, and Alan Rickman, who leaves a dark mark of sorts as his character says a slow and distressing goodbye to a memorable decade of magic.

Including the epilogue from the novel was a pleasant surprise, and in some ways amusing as Harry, Ron and Hermione have been made up to look nineteen years older. We catch another glimpse of the Hogwarts Express, signifying the end of the journey on Platform Nine and Three Quarters where it all began. These films would not be here without the imagination of J K Rowling, who has brought a whole new world to children and adults alike; a narrative which I’m sure will continue for years to come, and films which will be played to our children and grandchildren. The genre of fantasy can match up to it, but I hope there is never anything similar to this magical world of love, friendship, childhood and mystery. Harry Potter is a boy, and man, who will be a role model for many children, and a figure who we wish we could all relate to. Personally, I’m still waiting for my envelope to Hogwarts, and will continue to do so.

The review of Harry Potter and the Deathly Hallows Part 1: http://theoohtray.com/2010/11/film-review-harry-potter-and-the-deathly-hallows-part-i/