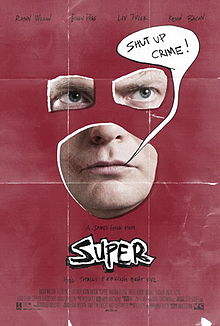 James Gunn’s black comedy, about a blubbing defective who adopts a super-hero persona when his wife, a former drug addict, leaves him for a dealer, in an outlandish bid to save her and restore his relationship, is a provocative and dangerous movie that asks a great deal more of its audience than the film it’ll inevitably be compared to, Matthew Vaughn’s Kick-Ass.

Comparisons between the two movies are useful, though hardly necessary. Both have the same structuring theme, the idea of an ordinary person inspired to become a real life comic book crime fighter, but there the similarities end.

Vaughn’s film was a valentine to comic book fandom that worked by first positing the idea that an ordinary geek could become a hero, before following a trajectory that took the newly minted panel fetishist to fantastic confrontation; their clichéd fantasy becoming reality. Sure, there were nods to real world pitfalls – the hero getting run over, beaten up, etc – but ultimately Vaughn’s movie was about wish fulfilment and fanboy gratification.

Frank, played with pathetic zeal by Rainn Wilson, is no hero, and he’s certainly not a character that comic book fans would wish to identify with, though in many cases he’ll be close to the mark. Wilson plays him as a broken man, a whimpering, socially retarded failure whose marriage, though venerated by him as the best thing in his life, is shown by Gunn, with a sympathetic detachment, to be a needy union, rushed into by both parties, and informed by deep vulnerability.

Wilson’s Frank is such an intense and humourless source of derision that there’s a real chance that Gunn could lose his audience. Do we really have to watch this degenerate for an hour and a half? But then, using the same black sense of humour and taste for the absurd that elevated 2006’s Slither beyond mere schlock, Gunn goes further, suggesting that Frank may even be mentally ill. If you’re inclined to see Super as a tongue in cheek tour of the social periphery, than you may be inclined to read Frank’s visions of divine intervention as harmless fantasy. The less generous will find the phrase “paranoid schizophrenia” tormenting them as the picture progresses.

Frank takes his cues from a blunt parody of the biblical super hero shows that can be found on US Christian TV stations. His visions include a squatting Jesus Christ and, in one bravura sequence, his head being top sliced by slimy tendrils and the finger of the almighty touching his brain. You think of serial killers and their common refrain – “God told me to do it”. If the Son of Sam put on a super hero costume, he might, you think, look a little like Frank.

Frank is motivated to free drug-addled wife Liv Tyler, from the clutches of sleazy new boyfriend Kevin Bacon, having objectified her as a fallen angel; he’s not a comic book aficionado. His inspiration comes from TV’s “Holy Avenger”, who Gunn suggests, tips the balance of his mind toward unhealthy and destructive vigilantism. He’s sincere but so what? Jack the Ripper thought he was performing a public service. However, comic book fandom isn’t absolved.

Ellen Page’s Libby, a comic book store worker, who Frank meets when he comes to collect “research material” and who later seeks out the vengeful hero in the hope of becoming his sidekick, is a ferocious critique of the disconnect between panel fantasy and reality that Kick-Ass celebrated; recasting it as something potentially dangerous and destructive.

Page makes Libby a furious, over zealous fantasist with a psychotic bent. Infantile and wide eyed, she eggs on the divinely imbued Frank to new and murderous extremes, suggesting that both characters are the most dangerous type of pairing imaginable; two loons united by self-righteousness.

It’s the presentation of these characters as self-absorbed and unhinged that marks Super out as an unsettling and at times, challenging tale.

Frank’s propensity to bludgeon ‘criminals’ of any stripe with a wrench, whether they be drug dealers or just an arrogant couple who butt into a cinema queue, is just the start of a violent crusade, which given additional fuel by the frenzied “Boltie”, results in wrongdoers being slashed to death, crushed with cars and incinerated. In the hyper-real world of the comic book, this is par for the course, but when the “heroes” are a dumped loner and a highly-strung comic book nerd, you’re less inclined to punch the air, rather hold your breath.

This discomfort undercuts the action histrionics that allowed the second half of Kiss-Ass to default to the comic book movie template we know so well. No one’s going to cheer Frank on in the second half of this movie, not least because he’s arguably more demented than his foes.

The aforementioned moral ambivalence is what makes Super an oddly hypnotic watch. To Gunn’s great credit there’s no simple, upbeat solution. Frank gets the girl but loses her again and we’d expect him to because we’ve known for the longest time that it’s not a healthy union. But Frank faces no punishment for the people he’s murdered; it’s a consequence free rampage. The audience is left to wonder how they feel about the dewy eyed, creepy misfit who freed his ex-wife to have a family with someone else, but killed a dozen people and got another couple killed in the process. Not simple knockabout fun then, and therein lies both the attraction and the challenge.