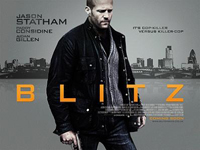 One imagines that Elliot Lester had a South London Dirty Harry in mind when Ken Bruen’s 2002 novel came crashing through his window, tied to a brick. Blitz is one of Bruen’s Inspector Brand thrillers, pitching a Macpherson unfriendly cop whose playbook contains a foreword by Henrich Himmler, against a series of depraved serial killers; the sort of inhuman, embodiments of evil that are simply too big to be contained by our wishy-washy, liberal judicial system. Lester, foaming at the mouth, would have seen gravy at the prospect of Sydenham’s finest and walking erection, Jason Statham, eating the rule book and vomiting the pulp into a monstrous adversary’s face.

Unfortunately Lester is no Don Siegel and Statham, though credibly formidable, lacks the conscience that made Harry Callahan human and likable. Siegel’s super-cop was a weary pragmatist who understood his enemies better than his officious superiors; his decisions were based not on bloodlust but inhumane identification and calculation. The law, Harry famously concluded, was “crazy”, but Siegel wasn’t prepared to take that at face value, with Eastwood’s Inspector paying the price for his pessimism as the true centre of a progressively dehumanising spectacle. The conclusion, undermined by superfluous, if fun, sequels, was a desolate Callaghan tossing his badge into a lake. In victory, defeat.

Statham’s Brand, however, has but a hair between him and the thugs he’s beating to fit the John Merrick mould. Perhaps he means well, perhaps he doesn’t care, but channelled through the prism of Statham’s personality, in a performance that suggests he’s doing an impression of himself, our anti-hero is an unapologetically violent, casually homophobic, misogynist shit kicker whom fatally, from an audience point of view, hasn’t been given the requisite wit required for endearment.

Instead, personifying the film’s washed out, grubby, tea stained frames, two hours in Brand’s company makes you feel unclean. Lester would no doubt be delighted, but levity cleanses the soul, even though the eyes are soiled. Without it, we’re wading through filth. This is a thriller which grandstands with brutal, seedy violence, and sandwiched between these stomach churning scenes is human failure, misery and unchecked cynicism.

Though they get a mention, perhaps a line surviving an earlier draft which the filmmakers forgot to excise, the Metropolitan police are notable absentees. In their stead we have the fictional “London police”, and the omission is no mystery. The Met famously cooperated with long running ITV series The Bill, because they approved, at least in its earlier years, of the portrayal. No one leafing through Nathan Parker’s script, however, could draw any conclusion except the police were hated almost as much as the criminals. It’s an unashamedly bleak imagining, which seems curiously old fashioned. It’s just as well that the London force is a fiction, because it contains drunks, bullies, drug addicts and zero female authority figures. There isn’t a single officer, except the pretty blonde one whose sole purpose is to work the computer for Statham’s 44 year old “dinosaur” and remind him of his success in fucking his WPC colleagues, who isn’t corrupt, broken, fundamentally dishonest or all three. Maverick cops flourish in conformist environs, the contrast being neat shorthand for character, but Statham’s man seems at home in a nefarious nick.

It’s hard to escape the conclusion that Lester has made a meal of what should have been a clean narrative. Perhaps with undue deference to the source material, there’s a series of flabby sub-plots, which cut would have mattered not one jot. Zawe Aston’s rehab refugee detracts from the action, tying up Statham in a series of ponderous exchanges about her drug habit and inability to adjust following a long undercover operation. If the Stath looks bored, then so are we, but never more so than watching her dead end romance with Luke Evan’s hunk play out. This might have added shading to the novel’s cop shop underbelly but here it’s undercooked and aimless.

Like the Elvis movie before it, the Statham movie is a sub-genre in itself, based as it is on a personality cult, and consequently normal critical considerations can seem irrelevant. His gruff hardman shtick, an alpha male plus, sinks bottoms, and Lester underlines the point, though it’s written in capitals, by partnering him with a soft spoken, homosexual (Paddy Constantine in a thankless role). Still, despite its fascist manifesto, Blitz isn’t without virtue. Ilan Eskeri’s thumping score lifts a couple of sequences out of tedium and Aiden Gillen is well cast as the an irremediable creep with a murderous bent. Ever so often the film threatens to be amusing, with much owed to Statham’s dead pan delivery and it’s undeniably hard edged, though stripped of any moral content, a charge of exploitation would be a no brainer for the CPS.