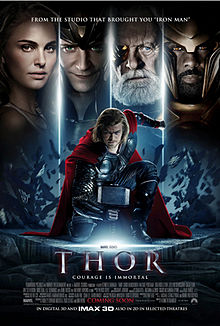 Kenneth Branagh isn’t a name you’d link to a fresh foray into Marvel’s cinematic universe, but for the Shakespearian actor and director the gig has a classic appeal, not immediately apparent to its target audience. He’s on record, comparing the story, with its passing King, warmongering heir and clash of kingdoms, with the Bard’s Henry V.

If you’re Branagh, who drinks tea from a Yorick skull and petitioned Marvel to change the titular character’s name to Thou, the opportunity to make a fantastical version of this classic story while indulging in a schoolboy regression, must have been too good to pass up.

It’s odd then, that watching the undeniably enjoyable result, recalls a different Branagh adaptation, that of Mary Shelley’s Frankenstein, for in Thor Branagh has crafted a very modern Prometheus; an unlikely fusion of Gary Goddard’s Masters of the Universe and Mike Hodges’ Flash Gordon.

Like Goddard’s cartoon hero, Thor, chiselled from a block of arrogance by Chris Hemsworth, is a super-human colossus, who’s marooned in small town America and invites its destruction when his galactic foes arrive to finish him off. The film flits between this Earth bound, God out of water low comedy – Thor walking into a pet shop and demanding a horse for example, and superior scenes on his home planet of Asgard.

It’s within Asgard’s gold and ornate confines, which owe much to the Mongo of 1980, that Branagh can indulge himself and let loose with florid language, duelling warriors, internecine warfare and thick camp spread over a lavish computer generated landscape. This is the meat of the film and it shows; its melodramatic, in the Shakespearian mould, epic in scale, thanks to the computing power unleashed, and often exhilarating.

Branagh has more trouble with the Earth bound scenes, which, like Goddard’s similarly troubled He-Man flick, threatens to be the flabby mid-section, bookended by otherworldly mayhem. It suffers for lack of incident. Thor is found, taken to the nearest town by a team of scientists, makes them breakfast, tries to retrieve his hammer, fails, gets drunk, goes back to the town and gets attacked – that’s it. Worse, the film relies on this inactive spell to facilitate the movie’s big, climatic emotional moment, in which Thor is faced with a dilemma, namely does he sever the connection between Asgard and Earth or not?

We might care more if we had anything invested in the relationship between the Hammer and Natalie Portman’s wishy-washy scientist. One senses that Branagh too, has next to no interest in this affair, perhaps because it’s underwritten, perhaps because he’s more interested in the Machiavellian machinations of Thor’s brother Loki, but whatever the reason, too little happens to this couple for anything of substance to be credibly built, and consequently the other arc crucial to the story, Thor’s transition from cocky bloodlusting blunderbuss to soft-centred, humility honking protector, doesn’t ring true.

Far more interesting to the detached viewer, are Branagh’s attempts at keeping himself awake during the threadbare centre section; the cinematic equivalent of that thousand miles of flat land between Banff and Toronto. His remedy is to imbue slow scenes between Portman, fellow scientist Stellan Skarsgard and gawping assistant Kat Dennings, with Dutch angles, perhaps in a tip of the hat to the broad area of Europe from which the original Thor legend originates. The style keep the eye busy, with odd references to other characters from the Marvel canon briefly reigniting interest as the head starts to drop, but Branagh knows this is fat on his Bard shaped steak and as soon as he can, he cuts it off and heads back to Asgard for a fratricidal, FX heavy climax.

Uneventful though the middle section is, it is at least breezy and that, combined with high tempo and earnest scenes in Thor’s hometown, make for an enjoyable romp. Hemsworth is well cast in the lead and keeps the film going when it starts to slow down. Anthony Hopkins, as Thor’s father and reigning monarch Odin, can do this sort of thing in his sleep (in fact he is asleep for half the picture) but is nevertheless good value, giving the scenes between Father and Sons a bit of heft.

Each of these Marvel movies has to be judged with one eye on the grand plan, that is the integration of these characters into a super-franchise, Joss Whedon’s forthcoming Avengers movie. Thor is therefore both an origin tale for the character and a prologue to another film. As the former it’s just about successful, making up in overblown theatrics what it loses in humour. As the latter, it’s mission accomplished. It may not be strongest film to have made the transition from comic book to screen but it does whet the appetite for more from the hammer-wielding thoroughbred and his jealous sibling.