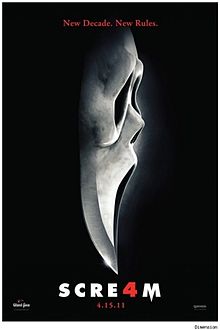 Years ago I began to draft a book called Film Underground: An Anthology of Cult Movies, composed entirely of fictional capsule reviews. Sadly my computer’s hard drive crashed and the file was lost, but amongst the entries I can still recall was one entitled Postmodicon: The self-referential spectacular. The review discussed a film in which each set of characters, tonguing their cheeks, played versions of themselves, drawing attention both to the artifice of their on screen personas, but also the filmic conventions employed to manipulate the audience. At the end of the film, all pretence at creating a self-contained world was abandoned. The actors sat next to each other looking directly to the camera and winked in tandem. Slowly the camera moved in, settling on a single eye that winked at the audience for the rest of the picture. It was post-modern filmmaking in its purest form. It was also meant to be a joke.

We don’t call post-modern films post-modern anymore of course; the term has its own contemporary, post-post modern label, “meta”, which when employed by film geeks to draw attention to their knowledge of cinematic conventions, knowledge built at the expense of a critical faculty, causes those of us still interested in the simple pleasures of story, character and meaning to reach for their gun.

Whatever you call it, the Scream series is unique in that it was the first to build its audience using a form of genre recognition whereby the filmmakers subverted expectations by opening up their feeble box of tricks to audience scrutiny, then showing us a new one. By acknowledging that the repetitive nature of the slasher film had de-sensitised gore whores to the shocks, and featuring characters that knew how the game was played, they could simultaneously celebrate this low-brow crud, while imbuing it with a hitherto unseen amount of knowing sophistication.

This civil partnership between genre stalwart Wes Craven and fanboy Kevin Williamson, worked very nicely. The problem in resurrecting the series in an era where a post-modern perspective is de rigueur amongst the young, thanks in part to movies like the original Scream and when our knowledge of genre clichés has reached saturation point, to the degree that we’re crying out for originality rather than the tendency to substitute it with self-referential asides, is how do you make it fresh? What does a post-post modern movie look like?

Sadly the answer is something very similar to Postmodicon, a film I hoped would stay tucked up in my imagination. The enormity of the task at hand wouldn’t have escaped Williamson, and his solution, following Scream sequels that’d already explored films within films and the notion that all this blood and guts warps its audience’s sensibilities, is a fudge. His script is littered with contemporary references, flaunting its modern credentials – Facebook, Twitter, apps, web casting – all are name checked, but this fails to detract from Scream 4’s antiquated histrionics. It’s all very well for Craven to pre-empt criticism of his technique, using a set of shaky false starts, but what becomes apparent as the new film continues is that the veteran schlock peddler has nothing left in the tank. For all the authorial flagging, Scream 4 is sill reliant upon people backing into others accompanied by ear splitting musical cues and the camera following pretty girls around nooks and corners to mine unease. Few people do this with greater efficiency than Craven, but the lack of innovation blunts Ghostface’s knife.

Craven and Williamson know, even if their audience don’t, that they must feed the beast as well as hold a mirror up to its face. Consequently, beyond a few furtive references to pretty girls with big tits and the absence of gay characters in these sensational blood baths, the structure is left untouched. This is still a series that gets hard on misogyny, hating sexually precocious young women with a zeal that would have embarrassed Jack the Ripper, and it’s still a heterosexual stronghold. The one question you’d like them to take a stab at, which they won’t, is why would a group of kids who know so much about cinema waste their time on this sort of crap? Why do teenage boys like to watch pretty girls get eviscerated and why do the would-be victims get off on watching their proxies get butchered? That, surely, was where this investigation should have been heading in this cine-literate era of ours, yet this sequel is content to get off on its own limited self-awareness.

Scream 4 only really starts to cut through the sense of familiarity in the final act, in which Jill, cousin of original prey Sidney, is revealed to be the killer. Her motive was to assume Prescott’s position as victim extraordinaire, complete with life-long attention and notoriety. Here, you feel, is the germ of a good idea and perhaps the reason Williamson thought there was more to be done with the series. There’s veiled criticism in this denouncement of the media’s tendency to exploit and our willingness to be exploited as a substitution for the hard work and talent that brought people acclaim in days of yore. Though the sentiment is welcome, the idea of an exploitation-critiquing exploitation movie feels like a non sequitur. Still, let’s not dismiss it; it’s the only new idea this creaky sequel has to offer.