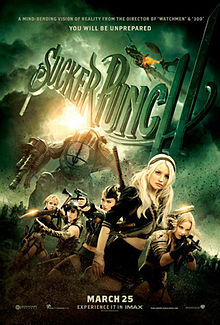 Listen, there are some bastards out there, tugging their trunks and saying that Zack Snyder’s film hates women. That’s nonsense. Zack loves them. Look at the way he gets up close, stroking Emily Browning’s thighs, dressing her in pig-tails, putting a tool in her hand. I’m telling you, I had a sword between my legs while it was going on! If I’d crossed my arms I’d have severed off both! He also gives them cool names. No, not to dehumanise them, God you’re so predictable, but to make them easier to tell apart. There’s Sugar Tits, who looks like she might taste of sugar, Flaps, Delicious, Darling and Cleavage.  They kick ass so hard that it’s a wonder they don’t puncture them. Seriously, we’re talking bombs with breasts, bullets with shoes, explosions of bum fat! Ultraviolence has never been so arousing.

Let’s explode a few myths about this movie, because there are a lot of critics out there who’ve broken into its house and started to beat up on it while the kids watch.

It doesn’t make sense: How can you not follow it? Snyder’s taken out the plot and anything else that might cause confusion. Let’s remember the set up for the action. Sugar Tits’s mother dies, her Step Dad gets drunk, decides to rape her younger sister. Maybe he was doing this while the Mother was alive, maybe not, but men can turn on young girls at any time. It happened to my niece when my Uncle Keith started on potions. So Tits goes to shoot him, misses and kills her sister. That’s called emotional foreshadowing because later Tits will try and free Delicious, who’s like a new sister, from her own private hell in the real world. That’s redemption innit. Actually, the end might be a fantasy, I’m not sure, I suppose it had to be because Scott Glen was a figment of Sugar Tits’s imagination and he’s in it at the end. But hang on, if she’s imagining that then why not put her sister on the bus with Delic- ah, I don’t know.

The premise robs the story of any jeopardy and consequently it’s a dull succession of inconsequential fights: Whoever said this wasn’t watching. It’s true that Sugar’s fantasies have nothing to do with what’s going on in the real world but they are tense because we know what’s really happening. That first one is well nervous. Sugar’s fighting three fifteen foot demons with swords and the place is blowing up around her and, oh man. Meanwhile, in the real world, well, the world within the real world, Cleavage, or whatever, is photocopying a map. Don’t tell me you weren’t thinking about that. And what about that weird World War One bit? While the girls are shooting German zombies, Flaps is stealing the lighter out of a fat man’s top pocket. What if she couldn’t pry it out? What if she dropped it and he noticed? I mean, I know we don’t get to see any of this stuff because we’re preoccupied with Sugar’s daydreams and that, but it’s still tense as.

The fantasy sequences are improbably modern given the character’s dull fifties upbringing and non-exposure to any obvious cultural references: Huh? So the film is wrong because Sugar’s got an imagination that looks like a series of cheesy genre movies made decades after her time? Can’t she be a visionary? I think she’s a genius actually because she’s predicted CGI and computer displays and steampunk and all that stuff and she did it without any books, comics or movies. Could you do that? I know people like to bleat on about Labyrinth and how that made sense because Sarah had all the stuff from the movie in her bedroom – the story, dolls of the characters, etc, but maybe Sugar Tits just imagines harder. Anyway, it’s a movie, that point is bollocks.

Scott Glen: What have people got against Scott Glen in this? Alright, Sugar Tits has never met him but she could dream him up, couldn’t she? Maybe he’s in control of everything, like Freddie Kruger in the dream world. Scott might have been a rogue warden in the mental home once and was lobotomised. After that his soul might have left his brain and remained trapped, only existing to help the prettier inmates escape. Even if none of that is explained in the movie, doesn’t mean it isn’t true. Anyway, he’s in it at the end so that means he is real, unless that’s Sugar’s brain, but then where did he come fr- look, movies need wise men, right? Having Glen in it makes him like their man-boss, a Charlie’s Angles sort of thing. It’s better like that.

Snyder has remade Moulin Rouge, adding guns but sadly, no additional plot or character: And? It looks amazing doesn’t it? How about respecting all the time he’s taken storyboarding the action and getting all the angles right and setting up each shot. What about all the effort the animators have put in? I think it’s artistic. Anyway, Moulin Rouge might have been shallow and all razzmatazz but that didn’t stop it getting an Oscar nomination did it? When Sucker Punch gets its nod for best picture there’s going to be a few people feeling pretty stupid.

Seriously go and see this movie, it breaks rocks, takes the ten out of ten and leaves you in the queue to the rollercoaster.