The Quick and The (Un)Dead

As the old saying goes, there’s never a good time to be involved in a zombie epidemic. Still, the noughties have proved to be a particularly poor era to try and escape ravenous legions of the undead. Almost every zombie film previously, from 1932’s genre grandfather White Zombie, through George Romero’s Dead series, to even 1998’s Scooby-Doo on Zombie Island, featured reanimated corpses with all the athletic ability of a heavily-stoned teenager. But, Danny Boyle’s 2002 post-apocalyptic Britflick, 28 Days Later, dug up a new breed of zombie, capable of doing more than simply moaning, shuffling, and snaffling the odd brainstem; the walking dead became the running and jumping dead.

Of course, the old breed isn’t simply going to shamble off into the darkness and peacefully rot away. Instead of replacing their graceless brethren wholesale, the introduction of the so-called ‘fast zombie’ has merely stratified the cinematic world of the undead into two camps. But, despite the protestations of supporters of the older model, the fact is that the fast zombie has changed the entire dynamic of the genre. 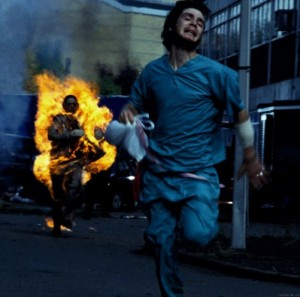 Whereas previously the undead were little more than stumbling sacks of semi-rotten meat, only posing a legitimate threat in large numbers, Danny Boyle’s reimagining has shifted the decaying hordes from subhuman to superhuman in the blink of an infected eye. Rather than a slow, lumbering force to be outsmarted, the new breed are powerful, tireless, and not quite as dumb as their decaying predecessors.

This shift, from a lone zombie being almost a figure of ridicule – the pie fight scene in Romero’s Dawn of the Dead is the greatest example of this – to a terrifyingly physical threat, was memorably ushered in by the opening scenes of Zack Snyder’s 2004 remake. In Snyder’s frenetic vision of the apocalypse, even the least intimidating human can be transformed into a fearsome killing machine, as shown when the lead character’s husband – a strapping, six-foot-plus bear of a man – has his throat torn out by the teeth of a seven-year-old girl, who then proceeds to attempt to break down an oak door like a pre-pubescent battering ram.

The message is clear – while Romero’s zombies were basically a secondary threat, a containing presence until the inaction and infighting of the survivors allowed them to become a very real danger – the new breed are, like a potent virus, near inescapable and absolutely deadly. Likewise, as Charlie Brooker, creator of the 2008 television series Dead Set, which followed a zombie apocalypse from inside the insular world of the Big Brother house and utilised the fast variety of zombie, states, ‘You only need one or two [fast zombies] to present a massive threat.’ 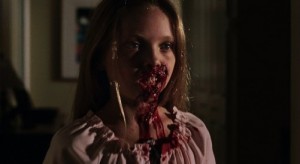 But, the old style of undead is not without its supporters. Simon Pegg, writer and star of 2004’s rom-zom-com – that is, romantic zombie comedy – Shaun of the Dead, is a firm believer in the classical, slow version of the undead. ‘Death is a disability, not a superpower,’ reasons Pegg, referring to the tendency for newer genre entries to grant their decaying antagonists an augmented physicality. ‘It’s hard to run with a cold, let alone the most debilitating malady of them all.’

Pegg also sees the move away from slower zombies as a reflection of the ever-shortening attention spans of the average movie-goer, a shift that he feels has impacted the very nature of the films themselves. ‘The fast zombie is bereft of poetic subtlety,’ he says. ‘It’s the difference between someone shouting “Boo!” and hearing the sound of the floorboards creaking in an upstairs room; [It gives] a quick thrill at the expense of a more profound sense of dread.’

While Pegg sees the modern zombie as little more than a rotting jack-in-the-box, the new breed of undead is very much a product of the times, a fact even George Romero himself backhandedly acknowledges. ‘When I did Dawn, I went to visit this shopping mall that was being built around Pittsburgh,’ he says. ‘It was the first one I had ever seen. It seemed like this temple to consumers, and so that’s where the idea came from.’ With the effects of commercial consumerism a hackneyed topic by the time Snyder remade Dawn, Romero suggests that the movie had ‘lost its reason for being.’ 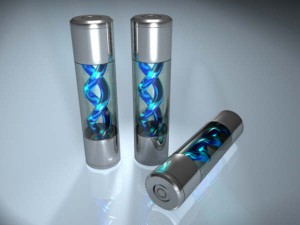 But, somewhat fittingly, the majority of the post-28 Days Later breed aren’t, in the strictest sense of the word, zombies at all. Rather than the reanimated husks popularised by Romero, the new strain are largely the result of viruses – a prescient reflection of the fear of shadowy corporations and biological weaponry so prevalent in the present age. From Juan Carlos Fresnadillo’s sequel to Boyle’s genre-divider, 28 Weeks Later, to the low budget Spanish horror Rec, Canadian indie-flick Pontypool, and the comedic Zombieland, viruses are now the zombie apocalypse instigator-of-choice.

As a product of the cynical times we live in, it should come as little surprise that science has superseded the supernatural as the key creator of otherworldly threats. ‘In so many ways, our supernatural gods have been replaced by technological wonders,’ says clinical psychologist and zombie aficionado Dr. Carolyn Kaufman. ‘So, of course, our monsters can’t be far behind.’

As such, instead of Romero’s Dead series playing on the spiritual result of the world’s moral bankruptcy – ‘When there’s no more room in Hell, the dead will walk the earth’ – many of the new breed of zombie flicks play on our fear of closed-door science, on the notion that monolithic, faceless corporations may be attempting to replace the very Gods whose influence they have eroded.

‘These days, most people are not afraid that God is going to strike them down, they’re more afraid that something in the medical world or pharmaceutical world is going to backfire,’ says Kaufman. ‘There is still is so much mystery behind what big corporations are doing; they have so much power and so much influence in our lives.’ 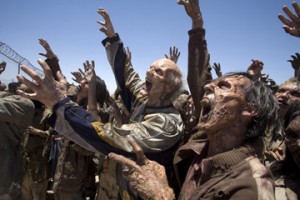 ly demystified, we have moved on to a new and, for the majority, similarly unknowable source for our nightmares – genetic science. Even so, this change hasn’t altered the key appeal of zombie films as much as you might think. After all, as Arthur Clarke, the English physicist and science-fiction author, put it, ‘any sufficiently advanced technology is indistinguishable from magic.’ Scientists are the sorcerers of the 21st century – black magic practitioners who cast their spells with syringes and beakers rather than hexes and chants.

As such, if the older, slower zombie is a complex metaphor for destructive self-absorption and decaying morality, then the new zombies are a symbol for a feeling of powerlessness in a world that is continually moving, like the sprinting, snarling undead themselves, at what seems like a hundred miles an hour. What Pegg sees as a sacrifice of dread for shocks in the new breed of zombie movies is merely a reflection of the world in which they have been created – influenced more by the realms of videogames and internet nasties than the Haitian Voodoo myths and lumbering monsters of the studio era. Rather than, as Romero suggests, losing their reason for being, the new batch of zombie flicks have harnessed the fears of their own age, transmitting them through the familiar, and yet still terrifying, imagery of their decaying forebears.

One thing is certain – zombies, in whatever variety, are more popular than ever, seemingly second only to vampires, a by-product of Stephanie Meyer’s monolithic Twilight series, in prevalence in popular culture. So what is the appeal? ‘Other monsters may threaten individual humans, but the living dead threaten the entire human race; zombies are slate wipers.’ says Max Brooks, author of World War Z: An Oral History of the Zombie War, a film of which is currently being developed by Brad Pitt’s production company, Plan B. Simon Pegg, on the other 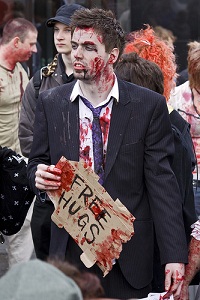 hand, thinks the appeal of the undead lies in what they metaphorically and physically represent. ‘The zombie trumps all by personifying our deepest fear: death,’ he says. ‘Zombies are our destiny writ large… [they are] unstoppable and intractable.’

So what of the battle between the Boyle-birthed ‘infected’ and the classic Romero zombie? In the end, with each strain carrying its own allegorical and terror-inducing weight, the result comes down to personal preference. With the opposing rotting hordes at an impasse, perhaps the last word should go to Max Brooks – a man who has made a career out of his fictional expertise on the undead. ‘Slow zombies are a wonderful metaphor for the anxiety over human mortality,’ says the ever-poetic Brooks, ‘and fast zombies are gay.’