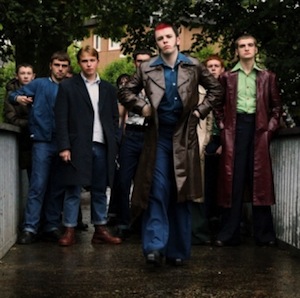 I first encountered the acronym NEDS (Non-Educated Delinquents) when I arrived at my Scottish University, back in 1998. In common with other regional underclasses, the Chavs of London, the Wastrels of Buckinghamshire and The Gentry of Wales, Neds were a source of derision; jesters employed in the court of public opinion. They were also superhuman, possessing an ability to make you die of laughter by using the insult “daftie” as a precursor to a beating.

These whiny voiced, track suited peacocks, with their idiot swagger and appalling lapses in style, articulacy and intelligence, made the Scottish middle class feel good about itself. That was their function and they did it magnificently. It didn’t seem to matter why they existed, they were just a cultural fact, like Whisky or Clydesdale bank notes.

Peter Mullan’s Glaswegian memoir, set in the early to mid 1970s and coloured like an old photograph, tries to correct that distortion by humanising the groups of angry young men that would be forced to communicate in grunts if it wasn’t for the words “pal”, “cunt” and “youse”. He subverts the imbecilic stereotype, finding another way into the subculture in the form of John McGill, a bright boy from a broken home, who’s quietly flourished in the shadow of his feared and degenerate older brother, Benny. Benny is the archetypal alpha NED; a shitkicker, whose reputation has grown amongst street urchins, allowing his beta brother to survive unmolested.

Mullan uses McGill the younger to trace the pathology of this particular Scottish social disease. John is an ambitious boy with a keen intellect, in spite of an accursed inheritance, but mid-seventies Glasgow is not the time or place to have ideas above your station. Early scenes in John’s Catholic school, informed by Mullan’s experiences, establish that this is a highly stratified society. Kids are brutalised with stringently enforced corporal punishment, segregated according to an early assessment of their intelligence and failed by the teachers that are paid to nurture them.

John is mocked for having intellectual pretensions by one Teacher and singled out for praise by another, thereby making him a pariah amongst his classmates. In exchanges that would seem wrongheaded and socially inept from the perspective of modern educationalists, John is even denied a place in the “top class” because of his brother’s history of violence and disruption. The school system therefore reinforces the very inequities it’s supposed to level out with John a perpetual prisoner of his background.

In a community where intelligence has less currency than a Scottish pound note south of the border, John’s attempts at social mobility are doomed. Class envy, resentment and suspicion are never far from the surface in Mullan’s account. As John gets older he tries to cultivate a friendship with a middle class boy of matching intellect but the Mother, fearful and snobbish, has other ideas. If the middle classes assiduously protect their own interests and their privileged position, fostering hatred from below, as Mullan suggests (and we’ve no reason to doubt it), then attributing blame for Scotland’s social ills becomes a zero sum game.

Neds diagnosis of the problem is straightforward enough then, but what does it have to say about the role of the individual in all of this? Can you beat the system or we just social puppets? John’s progression from class swot to a boy that goes out with knives gaffer-taped to his hands is tragic, if flirting with implausibility, but absent is any notion of personal responsibility. John’s transformation comes over a summer where he finds acceptance, respect and camaraderie amongst his brother’s band of Neds. He has no positive role models, his father being an abusive drunk (Mullan playing a version of his own Father) and his older brother a violent headcase. He’s lonely and he’s mocked for daring to be different, so, says Mullan, you can’t blame him for choosing to degenerate. It may be lawless, listless and self-destructive but thumbing your nose at society is empowering when the ladder’s been kicked away and it nets you a gaggle of mates.

It’s a persuasive analysis that has found voice amongst working class writers like Jimmy McGovern, who used it to great effect in Cracker, with Robert Carlyle’s Albie espousing the same ‘if this is how they treat me, this is what they’ll get’ mantra to justify a series of murders. Mullan and McGovern are asking the same question; namely, to what extent are individuals indebted to a society that doesn’t value them? Mullan suggests that the answer is “not much” and he’s astute in presenting the institutional and sociological factors that make that philosophy so seductive. Ah, you say, but isn’t the onus on individuals to persevere and improve themselves? Isn’t that what Mullan managed to do? The film has nothing to say about that and consequently, despite its bold efforts to the contrary, it ultimately becomes a dehumanising experience and apology for self-ruination.

The final reel does have John free himself of his gang and return to education but he’s starting again from the bottom, the film leaving the prospect of his full rehabilitation as an open question. A wagging finger at society then, but as Mullan has the answer it’s curious that he neglects to share it with his audience. Perhaps that’s the tension between reportage, culled from first hand experience, and a personal story reimagined with political and historical awareness retrospectively applied.