LFF Film Review: Let Me In 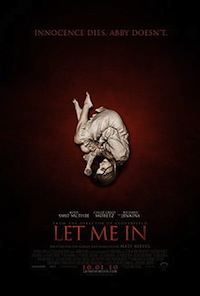 The second cinematic outing for John Ajvide Lindqvist’s Låt den rätte komma in (Let the right one in), is still a supernatural film blanc of the first order, though now it comes under the classic Hammer banner and swaps the icy Stockholm environs of Tomas Alfredson’s adaptation for New Mexico. It’s winter in Reagan’s America…but wasn’t it always?

The name change, prompted by the assertion that a five word title might confound American audiences, is fortunately the only conspicuous Californication in Matt Reeves’ version. The other changes are pure Hollywood, but Hollywood at its best; the dazzling, hallucinatory cinema of the 1970s and early 80s in which Steven Spielberg, Tobe Hooper and peers, stylised intimate stories of troubled adolescence to mesmerising effect.

You can understand why Reeves might reach for memories of early Spielberg when adapting the story. There’s something distinctly E.T about the tale of a young boy with an absent father who befriends another lonely outsider, but those attached to the chill of the original story need not worry. Reeves’ retains all the menace and monstrousness of Alfredson’s film. What he is adds is a heightened sense of reality – manna for the eyes. It’s an exciting and well-realised conversion.

Alfredson’s adaptation was cold and static; harrowing in its intensity and meticulous in its staging like so many Sweedish thrillers. Reeves adds colour and depth, illuminating Owen’s bedroom with a orange hue reminiscent of the alien incursion into the Neary household in Close Encounters of the Third Kind, relishing in the artifice with flashes of lens flare and opting for shallow focused shots that create two distinct plains of action; adult characters relegated to the soft background.

He’s also more adventurous than Alfredson in his construction of the narrative and its staging. There are bravura setpieces – the theft and subsequent crashing of a car, shot from a static position in the back seat vacated by Abby’s masked hunter gather “father”, and a vampiric feasting that takes place in a gloomy underpass, using CGI and sound to uncanny effect. The contrast with the original version of the scene is vivid. Alfredson’s was a more detached, matter of fact rendering of the murder. Reeves’ film is a full-blooded genre moment.

Let Me In plays with the novel’s timeline, beginning with the disfigured “Father’s” admission to hospital and Abby’s visit. Reeves frontloads the film with unease by turning this scene into a prologue and it affords him the opportunity to foreground the film’s social critique using an archived speech from President Reagan. Cutting away from Reagan in mid-sentence as he delivers the line “America is good, and if America ever ceases to be good…”, the film announces itself as a repudiation of Reganite values; a film in which binary distinctions between good and evil of the kind espoused by the gipper are at odds with the more selfish and unequal society he presided over.

Let The Right One In’s triumph was that it instinctively understood the context of Lindqvist’s novel; the rotten backend of a society where the real monsters and murderers are human, not vampire; bullies the predatory parasites that leech off the weak and vulnerable, worse for choosing to do so rather than driven by a biological imperative. It’s within this culture of hidden cruelty and atomised existence that a predator can pass almost unnoticed. The triumph of Let Me In is that it successfully transmutes Eighties Sweden to Eighties America and loses nothing in translation. The dread and intimacy of the original film survives but there’s something more to Reeves’ adaptation. Whisper it quietly but it might be a sense of fun.