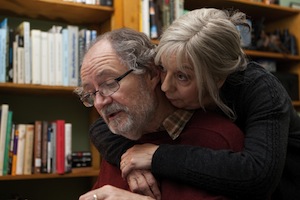 The Middle Age of Middle England

Another Year opens with a stand alone prologue in which Imelda Staunton plays an agitated insomniac receiving counselling for her sleepless nights, root cause unknown. The scene, involving two peripheral characters, only seen again briefly and divorced from the film’s story and main cast, foreshadow its themes; unrest in middle age, characters perturbed by forces they’re at a loss to understand, loneliness and longing. To frontload the narrative in this way might be thought of as idiosyncratic, but it’s a typically honest touch from Mike Leigh. Why saddle your film with contrivances when you can link characters in the abstract? Isn’t that how real life works and doesn’t such an approach separate realist cinema from soap opera?

Leigh, at his best, represents both the richness of British Cinema and its limitations. He’s sometimes thought of as a more colourful Ken Loach, casting his eye on the lower middle classes with an earnestness and frivolity that his earthier contemporary eschews. Leigh is no less a documentarian of British life, however. His scenes are cinematically inert, lacking dynamism or stylisation, yet they overflow with life; his camera positioned like a silent observer intruding on private grief. Often, his characters, like Lesley Manville’s Mary, gifting a stand out performance, enter his stories with a theatricality that threatens to become tiresome, but the strength of his semi-improvised and intimate approach to characterisation is that once he’s got them in, they develop organically and reveal their nuances in collision with others; it’s a very short journey from the hyper-real to the real. It mirrors, often with painful accuracy, the manner in which we get to know the people we know; not from moments of melodramatic excess but in studied bursts; a drunken conversation here, a look there, the way people perform in company.

Fine character actors like Manville, Jim Broadbent and Imelda Staunton give vivid life to a film like Another Year and this is the undoubted strength of British Cinema. Its limitation is that it’s rooted in the everyday and the domestic, making its cinematic status hard to justify. Why buy such a large canvas if you only plan to paint out one corner? Another Year will take its place in the pantheon of mature British drama but arguably such releases need to be balanced with domestic product of greater scale, ambition and experimentation. At present Leigh’s style of filmmaking, which would settle quite comfortably within the more intimate confines of the television screen, is at the forefront of indigenous celluloid, as safe and familiar as one of Jim Broadbent’s jumpers. Someone also needs to remind Mr Leigh that a low-budget British film need not announce itself with minor spasms of score, comprised of a single, solemn piece of instrumentation – in this case the soft pluck of a guitar and the stroke of a cello.

Nevertheless, to write off Another Year because of the tradition it belongs to would be a mistake. Seeing it in the cinema allows greater engagement with this play of manners and disappointments, a film rich in fine detail and engrossing in its subtext.

Leigh creates a fascinating diorama in which life-long and contented couple Tom and Gerri sit in sympathy and in judgement on the lonely friends that orbit them, noses pressed up against the proverbial glass. These characters have, as the title suggests, settled into a pattern in their lives, for good or ill, with age bringing the differences into sharp focus.

Leigh perfectly captures the dynamics that characterise relationships between friends with varying fortunes. Manville’s Mary is desperate and broken, trapped by underachievement and a lack of self-confidence that has lead to a series of poor decisions with long-term consequences. She’s fixated on snaring the happy couple’s son, Joe, not, Leigh suggests, because she’s a sexual deviant, but because she wants a stake in Tom and Gerri’s family and perhaps sees in Joe a chance to regress to her twenties and the point prior to her present day unhappiness. There’s barely concealed envy at the couple’s contentment, complicated by a wordless falling out when Joe finds a girlfriend and Mary’s jealously is brought to the service. The bubbly and sweet natured Katie is an unwelcome mirror held up to Mary’s face. We’re invited to speculate that this is Mary as she perhaps once was before life sat on her chest and refused to budge.

Leigh also contrasts Jim Broadbent’s Tom, the successful and happily married geologist, with his brother’s side of the family in the midlands. The third act, in which the family attend his brother’s wife’s funeral, is a series of black and white contrasts – the educated and the non-educated, social mobility versus stagnation, domestic bliss versus breakdown. The brother even has a bitter and perhaps, unloved son, who’s something of a shadowy reflection of his good humoured and successful cousin.

Despite having the names of cartoon characters Tom and Gerri are anything but and Leigh uses them effectively to test the limits of class tolerance. Their relationship with Mary is sympathetic but frayed, suggesting that their good fortune only allows them to empathise with her to a point. There are nicely observed conversations between the two, of the quietly judgemental variety beloved of mannered people. Whereas the inherent goodness of both characters is never undercut, the line between friendship and counselling (Gerri’s profession) is occasionally blurred with Leigh tackling, with great conviction, the tension that exists between good intensions and the less assured reality of close relationships. When Tom and Gerri put some distance between them and Mary for example, you’re sympathetic toward both parties. It’s that sense of seeing real world dynamics and archetypes fleshed out so convincingly that makes Another Year such a compelling watch. I’ve known two Marys in my life and I’m not yet in my mid-thirties.

In a film in which so much occurs under the cover of so little, I found the final scene perhaps best of all, as it draws these threads together with great understatement. Sitting around the dinner table there’s Tom and Gerri, their son and his girlfriend and the two strays, Mary and brother Ronnie. It’s a character study of the first order. We listen to Tom recounting his personal history, how he met Gerri and how their lives have built to this plateau. Joe and Katie talk about their plans for the future, Mary and Ronnie say nothing. Having slowly moved around the table the camera settles on Mary, looking across longingly, no story to tell, none in the making. Her face is a heartbreaking conflation of regret, sadness and envy. The most poignant fade to black you’ll ever see and worth the price of admission alone.