LFF Film Review: Everything Must Go 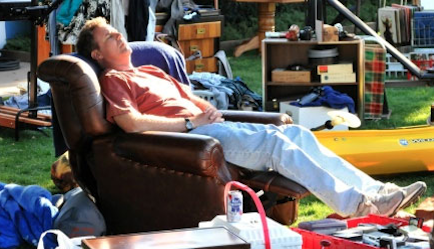 Dan Rush’s drama is flecked with comic touches but is noteworthy for cementing the tartrazine-blooded Will Ferrell’s status as an actor who can reign it in as well as vomit it out via wild gesticulatory madness. Adapting Raymond Carver’s short story, “Why Don’t You Dance?”, Rush retains the minimalism of Carver’s redemptive yarn and the simple but powerful metaphor that roots it – namely a man at his lowest ebb who’s forced to cast off everything that shackles him to a life that isn’t working and start again. There’s an echo of Tyler Durden’s infamous observation that the “the things you own end up owning you” in Ferrell’s predicament, returning home having been sacked from his well paid job as a sales executive to find his wife gone, his possessions on the lawn and the locks changed.

Ferrell’s Nick Porter is a study of character in extremis, emasculated by a lifetime of empty consumption and compromise and suddenly free to cathartically junk his failed past. The story wins plaudits for not taking expedient routes to resolving character conflicts. Nick’s fledgling friendship with new neighbour Samantha might, in his wife’s absence, have become a simple find and replace arc but instead the relationship is used to explore the compromises both characters have made at the expense of youthful aspiration.

Nick hits a nerve when he concludes that Samantha’s husband, a notable absentee until the final reel, has selfishly tied her into a deprecating trajectory involving domesticity and suburbanisation. Whether Samantha is indeed a victim or on the cusp of domestic bliss is a philosophical point the movie leaves wide open. In good film, as in life, there are no easy answers. Similarly Nick’s visit to ex-school friend Delilah, an extended cameo for Laura Dern, is effectively used to add shading to Ferrell’s character, rather than providing a love interest. It’s never certain that things will work out for Nick and such ambiguity keeps the narrative fresh, liberating it from formulaic shortcuts.

Ferrell instils a vulnerability in Nick that’s effective for not being overplayed. Alcoholism on film is always ruinous, as indeed it is in the real world, but Ferrell’s soak is unusual in that he has an inherent decency which his illness has failed to corrupt. Rush plays with the idea that Nick’s affliction has robbed him of his best moments as well as his worst. A touching scene between Nick and Laura Dern’s ex-schoolmate signals that Nick is no base drunkard. In the intervening years Dern’s character has retained the memory of Nick saving her from the unwanted attentions of a jock at a friend’s party. He hit the young buck and took Dern home, despite being only an acquaintance and having attended the party with his girlfriend. It’s an altruistic act, significant for Delilah, that’s been lost to Nick in an intoxicated haze. The filmmakers go on to play with this notion of missing character moments in the other great omission in Nick’s memory, the crucial question of whether he did or didn’t take advantage of a colleague during a business trip – the incident that has lead to the collapse of his marriage and the loss of his job. “Did you do what they say you did?” asks Samantha, only to receive the honest and despondent reply, “I don’t know.”

When Nick is later vindicated for the crime, the colleague in question exposed as a serial fantasist, there’s palpable relief, not least because we’ve become very attached to Nick in the interim. His innocence chimes with signals received throughout that despite a tendency toward self-sabotage, he’s more sinned against than sinning. The script paints a vulgar picture of the absentee wife who’s robbed Nick of his identity. The man who’s bankrolled the takeover of his life, seeing his swimming pool converted into a giant fish pond (which he urinates into) and his home ridden with oriental touches, sees the process completed when his possessions are deposited on the lawn. There’s little surprise in the final act revelation that the wife is fucking Nick’s AA sponsor in the police department, after all his drinking has made him an easy target for predatory personalities.

Everything Must Go is an intimate and engaging affair, anchored by a fine performance from Ferrell in a role that required a surfeit of subtleties. He’s brittle and affecting in a down-but-not-out story that’s darkly comic in places but ultimately life affirming. Not the easiest balancing act to get right and all concerned deserve huge credit for hitting so many of the right notes.