The Ooh Tray at the London Film Festival 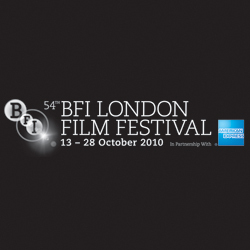 The 2010 London Film Festival (October 13-28th at selected Central London Venues) begins today and remains relevant in a crowded calendar, not least because of the breadth and depth of its programme. Independent Mexican cinema and French comedy have their place on the bill along with mainstream selections featuring George Clooney in Anton Corbijn’s The American and Will Ferrell’s return to “serious” comic roles in Everything Must Go. That curious phenomenon, British Cinema, is also in evidence; perhaps your only opportunity to see what we’re cranking out in our celluloid backwater, writ large on the big screen.

This of course, is the reason to attend such festivals. It’s an opportunity to enjoy film, free from the commercial imperatives that retard the distribution calendar throughout the year. Londoners are spoilt in that respect, enjoying privileged access to a wide selection of “art house” and foreign language fare at a murder of independent cinemas. London also enjoys the National Film Theatre (note to the BFI, this is its name, it doesn’t matter what you put on the boards outside).

For most in the country, however, access to the range of film offered this year is a mad man’s dream. Many of the films shown may struggle to get a slot on a distribution list where the Hollywood majors have first refusal. Others may not appear for a full year and then only on limited release, a la Gaspar Noe’s notorious avant-garde trip, Enter The Void (LFF, 2009), one of last year’s more memorable selections.

Consequently, if you live in London or environs you’re strongly encouraged to visit this year’s festival and give yourself a concentrated hit of something completely different. Certainly, you’ll find movies that won’t be seen again for good reason but to help you, The Ooh Tray is on hand to review its own picks from a bountiful programme, savouring the plums and saving you from the duds. If you do attend screenings of our Ooh Picks, we’d love to hear from you and sample your reflections on this year’s films, so please make good use of the comments section of each review.

Enjoy and please don’t forget to switch off that fucking phone.

You can book tickets for the festival at: http://www.bfi.org.uk/lff/

Posted in Film, LFF, LFF2010 | Comments Off on The Ooh Tray at the London Film Festival