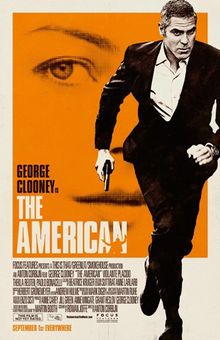 The former photographer Anton Corbijn successfully made the transition to moving pictures with Control, his biopic of Joy Division front man Ian Curtis. Control was a personal and highly stylised piece of work, rendered in monochrome and placing its audience on the shoulder of an enigmatic protagonist.

Watching The American, one felt an unusual tension; a conscious and calculated attempt at pulling back from style before it became signatory and established. Consequently this thriller is as cold as the Swiss snowscape that opens it, distancing itself from its characters. It’s also unnaturally colourful, certain scenes filtered to resemble tinted frames from the silent era, so old school it’s mordanted for God’s sake.

George Clooney gives a near silent performance, his face pensive personified, his increasingly craggy features holding in the bad memories of a life in thrall to duplicity, violence and a forced separation from human intimacy. Clooney is as icy as the movie is cold. None of its characters are allowed a full palate of emotions and expressions. Classically, these “man with a past” movies have had stylistic or formal compensations – psychologically aware lighting perhaps or smart, barbed dialogue, anything to provide a subtext that illuminates a non-communicative character’s disposition. Instead The American keeps the frame flat and goes for one line asides in clipped exchanges and some obvious symbolism – Clooney’s Jack sharing the rare and endangered status of the butterfly tattooed upon his back, for example.

If that’s a regret, it isn’t the only one. As alluring as Clara, the whore that Jack draws closer to while in hiding, is, there’s a shoulder shrugging aspect to the man of violence emancipated by the tart with the heart subplot. How many times have sociopaths found love in the bed of a call girl and aren’t these relationships nearly always mutually exploitative? Although meeting her this way gives the initial union some plausibility, given the emotional stunting of both characters, it automatically robs the relationship of any substance. Clara is almost entirely a sexual being, underscored by the camera’s intimate relationship with her breasts, and little more than a comfort for a man starved of any kindness. If Roland Joffe’s script didn’t rely on this creaky old trope perhaps it’d be possible to care more but when the novelty of kindness wares off, this you feel, is a dead end union.

The Italian locations that Jack hides out in are alien and old world, as rich and beautiful as the autumnal haired assassin for whom he’s making a bespoke rifle, but it’s a curiously uncinematic experience. This is movie making with a photographer’s eye. The scenes with Clooney’s opposite are instructive. She stands in a centre of a natural clearing, dressed like a fashion catalogue model and with the light exposing the outline of the top of her legs and buttocks through beige fabric. This would make for a great photo shoot you think but there’s almost nothing happening in the scene. Much of The American feels like this, with pacing that’s careful in some places, languid in others. When it succeeds it’s a tense affair, permeated by moments of dread that seep into you. More often than not, however, it’s like a gun that never goes off and where’s the fun in that?

When the story is threadbare and the picture lacks dynamism, all that’s left is the character study but Corbijn’s technique frustrates any attempt to truly get under Jack’s skin. Consequently The American is often as non-descript as its title.