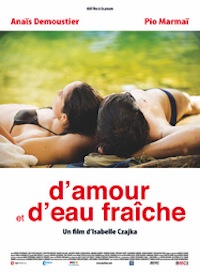 When there’s nothing worth working for…

Where do you stand on the issue on “the creatives?” Who they? They’re that constituency of young, idealistic wannabes who reject the drudgery of plain nine to five jobs in favour of trying of succeed within the creative industries. They pride themselves on being different from ordinary workers. They’re talented, driven, literate and sassy – this is what they tell themselves, and employers scoop them up as wage slaves, mining that fatalistic “anything to get a foot in the door” philosophy for cheap labour; the very drudgery that they’d hoped to avoid in getting educated.

Living on Love Alone gently mocks the vacuity and disappointment encountered by the creatives, while leaving the dream unmolested. Simultaneously it suggests that sexual and emotional fulfilment is the only compensation; the creatives dreams of sophistication perhaps no more than a petit bourgeois indulgence. Base desire and companionship is the universal currency and the one we’re truly subordinated to.

Anais Demoustier’s Julie is a sympathetic victim. She’s got plenty of bonhomie, plus she’s demurely sexy and craves excitement. It’s lucky that she’s so likeable because so many of the people she encounters are not. The early portion of the film centres on Julie’s new job at ‘Alter Ego’, a painfully generic PR agency in which any talents she may have are wilfully wasted in favour of being used as cheap childcare and a delivery girl for boxed lunches. In contrast she comes alive on the razzmatazz, picking up a 41 year old for al fresco intercourse (she’s 23) and later, seeing the archetypal bit of rough, whom she meets in a well-observed scene in which she’s obliged, pointlessly, to sell an encyclopaedia to an actor while being videotaped to access her sales skills.

It’s at this point that the film shifts from being lightly satirising to a more traditional study of ill-fated young love. Much is made of the blandifying forces of the job market prompting people to take greater risks with their personal life in order to plug the deficit and gain some measure of satisfaction, but once Julie is free from middling employment and on the road with a man she hardly knows, the story loses some of its insight and consequently the final third feels somewhat distended.

This is the socially aware, realist cinema that the French do so well, enhanced by credible characterisation and a particularly strong performance from Demoustier. She strikes the right balance between nativity and youthful idealism and is endearing enough to justify the running time. As the title suggests, there aren’t too many palatable alternatives to Julie throwing in her lot with a mysterious loner with excessive facial hair and an unlicensed firearm but crucially, one can understand why she’d do it. Living on Love Alone is therefore a useful snapshot of a time when society has put its lowest ever premium on skill and imagination and the generation that’s being betrayed as a consequence.