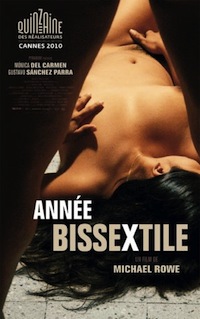 “I’ve waited two weeks for a plumber to fix my girlfriend” – this, perhaps a Freudian slip, overheard from a critic awaiting this Mexican tale of metropolitan alienation. It was, curiously, somewhat appropriate, alluding to the Ibsenesque fallacy that germinates in the minds of many men; the idea that women are a utilitarian bolt-on to their masculinity, rather than people in their own right.

This is the dominant theme of Leap Year, with a story that casts a dispassionate eye over the hidden lives of ordinary people; that “what lies behind closed doors” mystery that’s more acute in the built up environs of major cities. This is ironic given that humanity is more concentrated there, yet it’s also more atomised and lonely than in pastoral settings; community tending to keep the individual company.