Film Review: The Other Guys 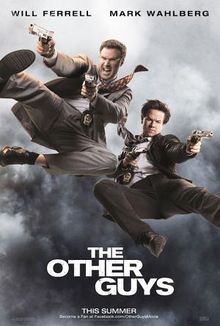 'This is not Miami Vice"

Detective Danson (Dwayne Johnson) straddles a jeep as it cascades through mid-town Manhattan, hotly in pursuit is his partner, detective Highsmith (Samuel L. Jackson) managing to stay in control of his vehicle while firing at the jeep and casually replacing the berry on top of his car when it is destroyed by a stray bullet. Not even crashing into a tour bus can deter the fearless duo as they take control of the bus and continue their pursuit, eventually catching and arresting the criminals who are in possession of… a quarter pound of marijuana. So begins The Other Guys, Adam McKay’s action-comedy about two run of the mill police officers who become involved in a multi-billion dollar fraud case and decide to take their chance to become the heroes of the force, rather than being stuck as the other guys.

The officers in question are Allan Gamble (Will Ferrel) a police accountant who is happy to stay at his desk all day taking care of the paper work of more action orientated officers like Danson and Highsmith, and Terry Hoitz (Mark Wahlberg), a promising officer who has been landed with Gamble as his partner on account of accidentally shooting a major baseball star, mistaking him for a criminal. Hoitz longs for more active police work, but is unable to persuade Gamble to join him. When Gamble arrests big-time financier David Ershon (Steve Coogan) for a scaffolding permit violation, he unwittingly becomes involved in something far more sinister, and Hoitz sees this, for better or worse, as the chance to finally get Gamble involved in, what he perceives to be, more serious police work.

Adam McKay and Will Ferrel have collaborated on three films previous to The Other Guys, most famously on Anchorman: The Legend of Ron Burgundy and while The Other Guys may not be as memorable or endlessly quotable as Anchorman, it proves an entertaining addition to their collection, and one that marks a departure down a more action-packed road. Indeed the action scenes are highly respectable, as McKay is not shackled by any need to be realistic in an age where the traditional cop movie has become a cliché. The fact that the focus is more prominently on comedy means that McKay can revel in the ludicrously over the top qualities of shoot-outs and chase scenes without worrying about anyone sneering at how unrealistic they are. A scene in which Gamble and Hoitz effectively kidnap David Ershon from a business meeting and a full blown shoot-out unfolds is as exciting and well shot (no pun intended) as anything you are likely to see in the latest blockbuster action movie, and the viewer can revel in how silly it is rather than being put off by it.

As for the comedy there’s a lot on offer. From the duo’s captain (Michael Keaton) quoting lines from TLC songs without realising it, to Gamble’s inexplicable ability to attract gorgeous women, including his wife Sheila (Eva Mendes) who Gamble doesn’t seem to realise is so incredibly attractive, much to his partner’s annoyance. Many of these jokes come off wonderfully and there are a lot of laughs to be had throughout the film, the only drawback being that McKay seems to have adopted the approach of throwing as many jokes as possible at the script and seeing what sticks. While most of these prove successful there are a series of jokes which do not come off nearly as well, and drag on for extended periods of time. McKay also fills the script with comedy at the expense of plot and for portions of the film it seems as if very little is happening. When revelations do come along they are never particularly shocking, meaning that while the film is both exciting and amusing, it is not a story that we are altogether drawn in to.

Nevertheless there is much to be enjoyed about The Other Guys. It provides as many laughs and thrills as we would expect from such a film and the chemistry between Ferrel and Wahlberg is better than expected, with Wahlberg proving to have a penchant for comedy to add to his excellent work in more serious roles. While more care could have been taken to provide a more cohesive and enthralling plot, The Other Guys is best enjoyed if the viewer takes the same approach as, it seems, its director did, don’t think too much about the story and enjoy it for what it is. You’re bound to have fun if you do.