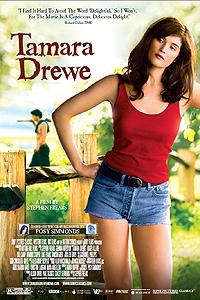 The competitive writers’ located at the retreat express the film industry as a whole, as they yearn to be published or even heard of.  The small town of Ewedown thrives on celebrity culture as I mentioned, and two gossip girls in particular, Jody Long (Jessica Barden) and Casey Shaw (Charlotte Christie), never seen without a magazine, urge the narrative forward by interfering on a more personal scale, as lustful fifteen-year-old Jody attempts to convince Tamara’s love interest, rock star Ben Sergeant (Dominic Cooper) to return to Ewedown in hope to seduce him herself.

This mad obsession initiates a pattern in the film, as younger girls seek love in older men, and is especially apparent when Jody chooses chasing Ben over her only friend, influenced by her fixation with fame. Tamara shows no interest in childhood sweetheart Andy Cobb (Luke Evans) who is technically the film’s prince charming, but instead pursues the more experienced type. It was quite uncomfortable to watch intimate scenes with such an obvious age gap between the characters, much like the romance between Rose (Emily Blunt) and Victor Maynard (Bill Nighy) in Wild Target (2009). As Tamara climbs over a fence in the beginning of the film, Beth says miserably “She’s poured herself into those shorts; I hope they don’t give her thrush” as though she is fighting her ground as all men look on with open mouths, there is some obvious tension between the older women and the younger, energetic women in the film.

The film as a whole is fairly sexual. Sex in the pub, the shed, and less adventurously in Tamara’s bed but perhaps not all audiences, specifically older audiences, will appreciate how feisty the film is. They may not approve of the increasingly bad language, either. Dominic Cooper’s indulgence with eyeliner makes his hard-guy drummer appearance appealing to any teenage girl; in spite of this he is much less romantic than his Mamma Mia! role. Not only does this film introduce a pressure within our culture in relation to celebrities and keeping up with the ‘goss’, it also makes a statement on appearance in reference to Tamara’s atrocious nose. As if society didn’t have enough to worry about, the more self-conscious consumers of Tamara Drewe may take this part of the narrative on borderline offensive.

On the other hand, those who are familiar with Thomas Hardy and the story of The Well Beloved, where a man is unable to commit to one woman but instead falls in love with three women of the same family in different generations, can apply this story to the themes of Tamara Drewe, as the audience are pulled through emotions of betrayal, confusion, excitement and sympathy. There are gaps left to be filled with our own thoughts; the ending is abrupt and unexplained. The fate of Beth is left in the air, and a death of one of the characters is the only ‘dark’ part of this comedy and left until the end which was quite anti-climactic.

Having not read the original source I cannot comment on how genuine the film was to the novel side of things, but it felt slightly unnecessary to have the seasons displayed to us to depict the passing of time, if anything these were ignored. As a British comedy Tamara Drewe is endearing regardless of the urinating cows, which only illustrates and emphasises the true British countryside.