Feature: The Convergence of Film and Videogames

Welcome to the Oscars, 2020. The rouge rug is in place, the paparazzi have on their best tiger smiles and the nominees have their speeches, tears, and looks of gracious defeat readied. The award for Best Director comes up. PT Anderson, the Coen brothers, David Fincher and a cryogenically preserved Clint Eastwood shift nervously. The winner is announced. The Kodak Theatre adopts a stunned silence. An overweight man in thick glasses makes his way to the stage, passing a beaming Guillermo del Toro. Gabe Newell lifts the Academy Award for Best Director with his meaty fingers, runs his tongue over his trembling lips, and thanks all those involved in the adaptation of the video game Half-Life for the screen.

The scenario outlined above may seem far-fetched, but events are in motion in both the games and film industries that renders the tale infinitely less laughable than it would have been even five years ago. Convergence is a buzzword that’s been bandied around by various talking heads since games first moved away from the exploits of blue hedgehogs and ethnic plumbers and began to imitate film. It’s a theory that suggests that the worlds of the joypad and the clapperboard are set for collision; set for an amalgamation of ideas, technology, personnel and properties. Indeed, Jordan Mechner, screenwriter for the new Prince of Persia film and director of the original game, recently stated that ‘Studio blockbuster movies and studio blockbuster video games have learned so much from each other in the last few years, they’re in danger of becoming practically indistinguishable.’

Although the fact that games are an active experience renders Mechner’s statement a tad hyperbolic, he’s on the right track – the arenas of the console and celluloid have shifted closer than ever before. From the alternate reality worlds of The Matrix and eXistenZ to the styling of Crank and the entire premise of the aptly titled Gamer, videogame aesthetics and archetypes have become more and more common in Hollywood productions. James Cameron’s monolithic Avatar is the latest, and perhaps greatest, example of this convergence. The film’s main crux of a digital rebirth in another body, of gaining control of an avatar, is the videogame’s most fundamental element. Likewise, Cameron’s much-touted virtual camera – a system allowing him to interact with his CG actors on the fly – was described by the director himself as a ‘big, powerful game engine.’ Avatar is convergence writ large with a half-billion dollars worth of polygons. 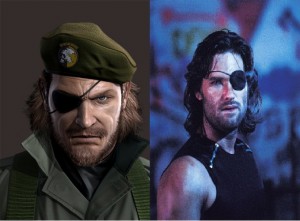 However, the relationship between the two mediums may be set to evolve. Assassin’s Creed II, released in November, was accompanied with a live-action short film, titled Assassin’s Creed: Lineage, developing the back story of the game. Garnering close to 2.5 million hits on YouTube alone, it is an exceptionally successful example of viral marketing. The use of short films as promotional material is nothing new – high quality advertisements such as Neil Blomkamp’s Halo: Arms Race, created partly as proof-of-concept for the now-canned Halo movie, have become more prevalent in recent years. But, the manner in which Lineage was created could be the first sign of a monumental shift in the relationship between film and games.

Filmic renditions of games, in whatever form, are traditionally developed by outside companies. Even the mighty Microsoft was forced to outsource production of the aforementioned Blomkamp promo to Peter Jackson’s Weta Digital. But, Ubisoft, developer and publisher of the Assassin’s Creed series, has bucked this trend. The developer’s purchase of Hybride Technologies – the effects studio behind Sin City and 300 – and their role in the creation of Lineage, sees the first time a games developer has retained sole control of a film-based interpretation of its properties. More-so, this acquisition, given that Hybride will continue as a film effects studio, effectively establishes a games developer as a major Hollywood power. 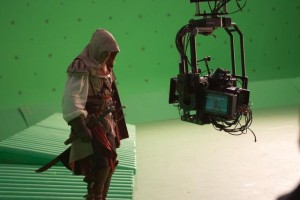 Furthermore, Ubisoft recently expanded their ownership of the lucrative Tom Clancy license, whose branded games they have published for the past decade, to include virtually all forms of media. Worth around €60 million, the deal will, according to CEO Yves Guillemot, lead to Ubisoft ‘becoming a major player’ in film production and result in significant ‘cross-pollination’ between media types.

Whether described as ‘cross-pollination’ or any other term, the notion of convergence littered the press releases announcing Ubisoft’s acquisitions of Hybride and the Clancy license. According to the firm’s UK marketing director Murray Pannel, the developer envisions a future media marketplace where the traditional barriers between film and game developers have eroded; where each assumes the rather generic role of ‘content provider.’ ‘Content is moving forward – in the future it will be king – and the platform almost become irrelevant to how you deliver that,’ he states.

While Ubisoft remains, for now, the only games developers to make direct inroads to film production, other companies are perfectly situated to do so. The budget of the average blockbuster game now runs commensurate with that of its filmic brethren – Take-Two’s Grand Theft Auto IV cost around $100 million to create – and they have the potential to financially trounce their counterparts. Activision’s Call of Duty: Modern Warfare 2 was, pre-Avatar, the highest-grossing entertainment launch in history, radically out-performing blockbuster movies such as The Dark Knight. With Modern Warfare 2 pulling in some $310 million in its opening 24 hours, and GTA IV grossing not much less, the $100 million taken by Chris Nolan’s opus in the same time-frame pales in comparison. With this in mind, major games publishers such as Activision and Take-Two certainly have the financial capability to join Ubisoft in the film market. They also seem to have the intention: Activision recently filed a trademark application for a Call of Duty film adaptation and have reportedly been in talks with various directors.

The main motive for developers to seek convergence of the industries seems to be the desire to retain control of their intellectual properties. Dan Houser, vice-president at Rockstar Games, developers of the Grand Theft Auto series and a subsidiary of Take-Two, has stated that ‘maintaining the long-term integrity of any entertainment property [is] dependent on not making substandard spin-off [with] people whose primary interest is making a quick buck.’ Only if Rockstar retains creative control, says Houser, will a Grand Theft Auto movie ever make it to the big screen. 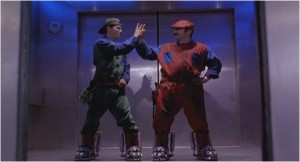 Given the history of video games in film, it’s unsurprising that the industry is untrusting of Hollywood. From the woeful Super Mario Bros. to the aptly titled Max Payne, few adaptations have enhanced their source material or been anything less than the filmic equivalent of paint-by-numbers. Even the best of these renditions, such as Tomb Raider or Silent Hill, could never be described as anything other than average.

This pattern also works in reverse. The production of game adaptations of films differ from their counterparts because they are traditionally marketing tie-ins: made with stringent control from the film industry and with narrow timeframes to coincide with a film’s release. However, a sad similarity these adaptations share is their general poor quality. A prime example of this traditional tie-in model is E.T. With developer Atari given just five weeks to create a game that would usually take six months, the result was so abysmal and was such a commercial failure that it is often cited as a major factor behind the mid-eighties videogame industry crash.

But, adaptations given the proper development can be worthwhile renditions – both The Matrix and Ghostbusters games are evidence of this. Likewise, the production of James Cameron’s Avatar: The Game utilises the same 3D technology as the film and, although an average game, is being credited for advancing the medium technologically. Sadly, the vast majority of film companies, as shown by the likes of the lacklustre Transformers adapatations, still seem to consider tie-ins as little more than digital Happy Meal toys.

Perhaps because of this, there are considerably less tie-ins hitting the shelves than at the start of the decade. As the sales figures quoted above show, a growing contingent of games developers no longer need to rely on adapting a Hollywood brand to turn a profit. Ironically, many film studios now rely on game adaptations as a major source of income. Constantin Film, for example, garnered a $65 million profit from the first installment of the Resident Evil franchise alone – more than their previous five releases combined. Make no mistake – filmic adaptations of games have become big business. 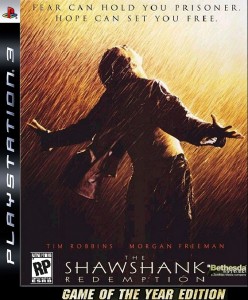 As such, the relationship between the mediums is at a crossroads. With the games industry growing ever more lucrative and, by extension, powerful, it seems likely the major publishers will seek to follow Ubisoft’s lead and move into the film industry in some form. Hollywood, with the threat of losing access to a market in which even the celluloid insult of Hitman can turn an $80 million profit, may be forced to change its traditional methods of producing adaptations and tie-ins. In short, greater collaboration between the industries, and cross-pollination between the mediums, seems set to occur. We may not see the likes of Gabe Newell hobbling onto the Oscar podium just yet, but all the evidence suggests that convergence is shuffling in from the buzzword wings and onto center stage.