Classic Book Review: The Woman in White by Wilkie Collins 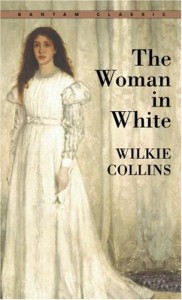 I have been late for work everyday this week. It is because of this book. Reading late into the night and getting up at 7am do not a harmonious morning atmosphere make. Of course, I blame the book. It is the book’s fault. I really could not put it down. I even read a little at work, under the desk. The most incredible thing about all this, dear reader, is that I’ve actually read it before. At the risk of sounding a little misty eyed, let me take you back for a moment in my reading life. I first read The Woman in White a decade ago, aged fourteen, while I was meant to be revising for SATS. This time around I am supposed to be researching a dissertation. What is it that, in times of procrastination, drives me to the comforting arms of rambling Victoriana?

Once smitten, however, I would defy anyone to resist the lure of Wilkie Collins. The Woman in White, like much of Collin’s fiction, contains a healthy element of early detective story. There is always a puzzle to be solved, and a new twist to uncover. I have read three of his novels now, and I really think that my decision to re-read The Woman in White really comes from a deep seated of fear of one day living a life where there is no new Wilkie Collins books to discover. I suppose this is the peril of only ever reading dead authors.

The reason for this highly anti-climatic structure is because like a lot of nineteenth century fiction, this novel was serialised in a magazine between 1859 and 1860. For me, this works well in a novel, dragging me along at high speed, forcing me to keep reading, late into the night, even when my eyes are burning and my head is fuzzy with sleep. Victorian novels should ideally be read late at night, or on trains. Incidently, Walter Hartright spends a lot of his time time on trains, travelling around the country doing his ameteur sleuthing. As I said, this novel has the feel of a dectective story to it; it also has multiple narrators, heroes and villians. Playing the part of principal hero is the aforementioned Walter, a poor drawing master who falls in love with his wealthy pupil, Laura Fairlie. Unfortunately, (and rather predictably) Laura is engaged to the sinister Sir Percival Glyde, so poor Walter must manfully master his emotions and take an expedition to South America to forget her, like a real hero would. After Walter’s departure, the story is left in the hands of the other characters, like Laura’s half-sister Marian Halcombe, who I have to confess a bit of a girl-crush on.

Hi Marian, I think you are awesome. You are everything I want to be when I grow up. I idolised you as a teenager, and I intend to do you full justice here…

If you are anything like me, you are an avid reader of nineteenth century novels, but find it hard to leave your twentith century feminist behind at the opening chapter. Marian is the perfect antidote to that. She just has more, for want of a better word, spunk than your average heroine. Ok, yes, she gets a dangerous unspecified fever thing and lies around weak and langid for about ten chapters, but really that’s pretty much a nineteenth century literature right of passage. Besides, you really should really take into account that she caught it lying on a roof in the rain to listen in on Percival and his creepy friend Count Fosco’s private conversation.

Sometimes it seems like Marian is a little too perfect, entirely motivated by her love for her sister. This troubled me, could it be that awesome Marian was a little too…erm, one-dimensional. It was on re-reading the novel that it all clicked for me, so I’ll give you this heads-up for free. While the style of the novel gives the reader access to a lot of different voices, the premise is that the characters are simply writing their statement of what happened with regards to the mysterious goings-on. So we do get to read different points of view, but we don’t really get to wander around unaccompanied inside anyone’s head. Which is a shame, as I would love to get to read Marian’s thoughts about herself and her precarious position in society (unmarried and decidedly unwealthy). Still, Wilkie was definitely onto something when he came up with this format (and I think Bram Stoker thought so too).

Laura Fairlie, the appropriately named fair lady at the centre of the novel, never speaks. She takes no part in telling her story, because she takes no real part in it at all. She is the epitomy of that passive female I bemoan. As a modern woman, I find it hard to believe in her, especially her descision to marry Percival Glyde, despite loving Walter, because her father approved the match on his dead bed. I mean, I love you and everything Dad, but don’t go matching me up with any of your weird, old man friends. I can be as mean as I like about poor Laura though, because I know she’s just a device to enable Walter and Marian to team up against Percival Glyde and Count Fosco. And if you’re wondering why I’m skirting around the issue of Count Fosco, it’s because I don’t possess the descriptive powers to do justice to the man. You’ll have to see for yourself. What I can tell you, however, is that where Percival and Fosco go, whispers and rumours follow. There are so many questions. Most important of all being ‘Who is the woman in white, and what connection does she have to Laura’s future husband?’

This is a novel of coincidences. What bigger coincidence could there be than meeting a mysterious woman at night on a deserted road, who has a shadowy connection to the woman you will love? The Woman in White seems to be the key to mystery, or rather the secret, which lies at the heart of the novel. The mystery must be solved if Laura is to be saved. So you see, it’s not really about Laura at all. It’s about Sir Percival’s secret, which takes on a life it’s own, and assumes it’s rightful place as the most important character in the novel. By the end I didn’t really care much about Laura, I just wanted to know what the secret is.

Now, I hope I’ve made you at least a little curious…I’ve tried to keep this as spoiler free as possible. I would never want to be held responsible for ruining a Wilikie Collins for someone. So…is your appetite for intrigue and secrets wetted? If yes, I think you should cancel all your plans for the next week and call in sick to work. You won’t be able to put this down.