Book Review: The Passion of New Eve by Angela Carter 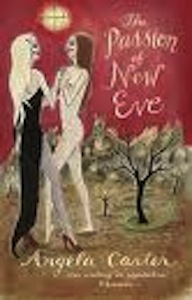 You must approach this novel with an expectation of being repulsed or cringing at some point. This is not to warn you off Angela Carter’s explosive creation, but to advise you of the challenge of reading this novel (I am going to be throwing in a few spoilers – so stop reading if you do not want to know any of the many twists that the story undertakes). At times it may feel like some parts are there simply to shock, but they all fit into place however squeamish or sick it might make you feel. Carter merely displays to the reader the slovenly soul of people, or the kindness that can come with understanding.

Evelyn, the protagonist, begins and nearly ends as quite a selfish character; always concerned with his own fate. His past is smeared with women’s pain that he caused by having a heart as bare and barren as a “desert”. He is transformed by another character called ‘Mother’ into a woman, and not just that but the perfect woman. Mother is an omniscient character who forced Evelyn into becoming Eve. As figurehead and deity of the cult she has created, ‘Mother’ is able to persuade her priestesses/followers to mutilate themselves in her honour. Mother is not a man’s woman, but a woman with eternal and controlling fertility. She appeals to her followers because she is unthreatening and is in turn their mother. They intend to live forever without men.

The plot line and narrative itself are superfluous, rather than the writing or language. All passages that the plot takes is relevant to something; containing some sort of symbolism attaining to equal rights, liberty or feminism. Carter writes with such fervour that some passages and certain words spark out at you in their violence. She frequently uses imagery that is steeped in legend and myth, which makes you as a simple reader dwarfed by Carter’s research and imagination. Images that pop up often or ones which are striking are beautifully rendered and the magnitude of consideration which must have gone into the writing is impressive. For example the references to Tiresias – the man who was turned into a woman as a punishment from the gods – is indicative of Eve’s predicament, and why he was turned into a woman. Tiresias also angered the Goddess Athena for watching her bathe; his disrespect is similar to that of Eve’s towards women when she was still Evelyn.

That legend was perhaps the most influential upon Carter, since Eve’s punishment is to suffer the doubleness of being a man in a woman’s body. This problem is broached straight after the transformation, as the maleness inside Eve is aroused by her outer appearance: “I had become my own masturbatory fantasy.” After being with Mother and her tribe of severe women Eve encounters danger and has to develop a female personality to be a convincing woman enough to survive. Forced through rape and humiliation Eve learns the true cruelty that can be inflicted upon females by the male sex. Even though as Evelyn, she recognised the cruel things he himself was then doing to women, he did not stop and aptly perceives that his/her change may be for atonement. There are many other examples of duality or twin images that create paradoxes within and for many of the characters. In a way, all the characters fit seamlessly together because of the facades and multiple personalities.

The image of Tristessa is a motif that occurs throughout the entire novel, which haunts the narrator Evelyn more than it does the reader. Beginning on the first page and remembered to the very end, the stage is set for a character to appear. As a result of the obsession over Tristessa, it is no surprise that the mystical character does solidly appear, because most of the other characters have lusted over or have been connected to Tristessa. She is seems to be the ultimate women; however the descriptions of Tristessa before you officially meet the character in the present are hazy or typecast.

There are several episodes particularly towards the end of the novel that could be construed as odd. This is because some scenes seem anachronistic, out of place. Conversely, as mentioned earlier, everything Carter has written once the novel has been completely read is perfectly in place. As you read, certain scenes encapsulate certain trials and emotions of the characters which may at first seem wrong, but eventually slot into place further down the line as you are able to understand the plot. It is important to take this novel as it is, and with total respect to Angela Carter, it is (for want of a better word) crazy. The novel itself signifies things that a crazy, yet with a touch of logical discourse. It could advocate order from disorder; the reader has to fathom what they think for themselves.

As with Carter’s other novels this fits into its own place. The Passion of New Eve is of futuristic writing although their author died almost two decades ago. It is addictive to read, and creates vivid scenes which cannot be erased once you have read them. Once you have read it you must read more – The Bloody Chamber, Fireworks, and The Company of Wolves is available on film although it does nowhere near enough justice to the frightening colours and descriptive quality of the writing. It may take more than one read to appreciate it properly or pick up on finer nuances, but it is magnificent.