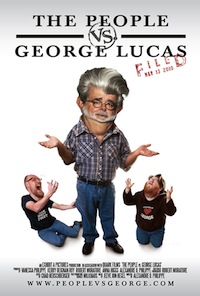 Not so long ago in a cinema not too far away, George Lucas’ shortcomings as a filmmaker were brutally exposed when he made the hubristic decision to write and direct the Star Wars prequel trilogy alone, eschewing the collaborators who’d alchemised his ideas in the past and covered his arse in so doing. In his youth, Lucas successfully piggybacked the myth of a visionary auteur on the shoulders of giants – special effect wizards like Richard Edlund and John Dykstra, the composer John Williams, screenwriters Leigh Bracket and Lawrence Kasdan, and Ben Burtt who provided the movie’s iconic sound effects. Lucas was a lucky man, whose genuine talent lay as a producer – savvy enough to insist on the retention of merchandising rights which a short-sighted 20th Century Fox imagined to be worthless, and technically astute in realising the scale of the technological challenge the movie imposed and driving forward the innovation to meet it.
Phillipe’s record of the fanboy backlash against Lucas, in light of the disastrous prequel trilogy and his much maligned story for Indiana Jones and the Kingdom of the Crystal Skull, is little more than a compilation of fan films and talking heads. It’d be more accurate to have called the film The Fanboys versus The Fanboys, and perhaps they’ll consider retitling in line with their subject’s modus operandi, as Phillipe paints a picture of conflicted geekdom, not quite able to reconcile their love for the original films with Lucas’ creative breakdown in middle age.
Cynics will say that the evidence has always been there, not least because the strongest movies from the Lucasfilm stable always belonged, in terms of direction and screenwriting, to someone else. Well, alright there’s the original Star Wars but anyone can be lucky once. Far more interesting is Lucas’ propensity for retrospectively amending his best work – an inexplicable act of self-harm and cultural vandalism which, depending upon your point of view, is either a sign of insecurity or a breathtakingly cynical corporate ploy to extract more coins from the wishing well.

If you accept the corporate thesis, Phillipe’s fanboys are little more than abused children who nevertheless cling on to their idol’s trouser legs, even as he’s kicking dried Bantha excrement in their face. In fact, given Lucas’ apparent indifference to the worldwide constituency of fans who’ve given the filmmaker his wealth and independence, you’re inclined to wonder if the people who’ve spent months of their life making parodies of the original film or, as one terrifying contributor suggests, living for decades with their conscience index linked to the movie’s teachings, “Star Wars created my moral universe”, need to, in William Shatner’s famous phrase, “Get a life”.

Funny (and enjoyable) though their level of obsession is, not least the seriousness with which aficionados frame the argument, there’s something desperately depressing about watching a man wearing a “he farted” t-shirt try to participate in a serious critique of an iconic movie. Occasionally, when someone makes a Freudian hand gesture, which speaks to you more directly than their argument, as in the case of the fan who contended that “the movie grabs us and shakes the innards” while inadvertently making a masturbatory flicking motion with his hand, there’s guilty laughter but also the notion that Phillipe’s camera has inadvertently captured an all pervading truth.

An unintended consequence of Lucas’ success was the substitution of movies made for an Adult audience for infantile fare aimed at young and adolescent thrill seekers; such films having dominated the box office ever since. Lucas, along with movie brat confederate Steven Spielberg, invented the summer event movie, and subsequently an entire generation of American filmmakers have had their creative mindset dial permanently set to ‘trying to replicate the sensation of watching those early money-spinners’. Hollywood is frozen in a ’70’s teen bubble, like a Nagasaki watch face following the atomic bomb. The history of mainstream American filmmaking over the last thirty years is a group of Lucas acolytes becoming filmmakers and attempting to replicate his serendipitous success, with less wit and less training in the story telling values of ’40’s cinema which served the brats so well.
Just as thirtysomethings growing up in Britain today are sometimes known as Thatcher’s Children, Lucas’ children (and their children) fill up multiplexes and have changed the face of film culture. Phillipe’s film reflects this, recording fan after fan telling us how Lucas stoked their imagination while surrounding themselves with merchandise and looking lachrymose as they recall how the new films failed to meet the expectation that they’d be identikit versions of the old. That’s the most extraordinary thing about The People Vs George Lucas – this horrible idea that the Modesto Merchandiser did a generation’s imagining for them and left these kids with a mortgage sized bill for services rendered.
It’s hard to pin down where Phillipe’s sympathies lie. The first sections of the movie paints Lucas as, in turn, a hypocrite following his campaign to prevent classic black and white movies being colourised, arrogant, a sell out to his dream of a independent filmmaking utopia and contemptuous toward a fanbase that audaciously claimed ownership of his work for decades, before he had the good sense of remind them who was boss (and fuck them if they don’t like it). On the other hand, the final section wants to forgive the Holy Father – and with the reliability of abused children, there’s the suggestion the fans themselves may be to blame. After all, they put the pressure on Lucas to make the new films, failing to account for his inability to deliver a golden calf. Lucas, it’s suggested, is a victim of his own success; trapped by a legacy. In popular culture, only The Beatles reforming in the ’80s to produce a new album would have come close to the expectation that saw The Phantom Menace indelibly etched into the annals of film history for all the wrong reasons.
The People… poses interesting questions about the nature of fandom, who ultimate “owns” popular art and the prerequisites for successful filmmaking. Independence is the dream of every filmmaker but Lucas’ fate reminds us that film, almost exclusively amongst the arts, is a medium where unchecked individualism can be reductive. Necessary economies, collaboration, clarity of purpose, happy accidents – this you feel, are what make good movies cook nicely, along with healthy spectatorship, naturally. In film as in life, to love is divine but you mustn’t ever lose your sense of perspective…or your merchandise rights.