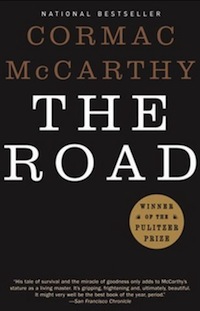 Cormac McCarthy has created a prophetic vision of our world that is simply terrifying. The Road questions our morals and deepest human instincts. It threatens our ideas of the essence of humanity. It asks us whether in the direst circumstances would we die or try to survive till the very last? The world (or to be more precise America) within this novel is so extremely grey that you cling to the characters of father and son for bright spots of hope or the remotest happiness. The bareness of the language used hints at the devastating world which the characters must comprehend. The fact that speech is not marked out from the rest of the text imitates the description of the surroundings; it is all the same.

The poignancy of the two characters relationship is defined by the cautious sacrifices the father gives in order to protect his son and therefore giving him a more optimistic outlook of the journey they are taking. Sometimes these are wrong, but occasionally they pay off. A sad measure of their explorations being by counting their provisions; as in the less food and comforts they appear to have even when gaining some. The father’s will to shield his son is often shattered by confrontation or the mere threat of other human beings still existing. However, the child through this retains a sense of naivety that leaves them both in danger. For example, the child’s disgust and fear at having to hold a gun even for his and his father’s protection. A child with a weapon is a disgusting image, but The Road questions whether it is ever appropriate – and perhaps the conclusion to that is yes, because it is their only physical defence.

The post-apocalyptic background cannot shrink the genuine bond between father and son which enables both of the characters to have the strength to continue on. Inevitably the boy has to learn to defend himself, but this is only learnt through the help and patience of the father. The character of the father may go to whatever lengths to look after his son, but in the novel he is keen to stress that he is not the perfect parent regardless of what he does. The emphasis is more on the boy being the parent’s saviour. The character of the mother implies this whilst still in their party. However, she is only a minor character whose actions impact upon the other two; forcing them together through necessity and shared loss. She does not crop up often during the text, which emphasises her abandonment of them and raises deep-seated issues within the idea of familial bonds.

Through the actions of father and son a moral stand point is formed which the reader then has to reflect upon their own. The rampant cannibalism that takes place or is inferred throughout this novel is a constant reminder of the danger that constantly threatens them. The very landscape around them appears to symbolise the futility of their carrying on – they are two people enveloped in a world of greyness that is forever getting darker and beginning to swallow them up. The dullness of their environment and the ashen backdrop is reminiscent of the volcanic ash cloud that recently prevented many from travelling home from other countries. It highlights the fact that the ash cloud might only be a taster of what the world is heading for. The Road is biblical in the sense that it presents us with a choice of being saved or destroyed. There is the hope that the characters may decide this for you through their journey, but ultimately it is for the reader to decide. The characters’ fate is theirs alone.

McCarthy’s novel could be viewed as a stark reminder of the care we owe our planet. However, in The Road it is not clear what caused the devastation that left only a pitiful handful of survivors, or if we are even too late too stop the damage already occurring to the Earth. Whether this novel is meant to be scare mongering or not, the bareness of picture of America leaves a chill of panic even in the most sceptical. The majority of life encountered within The Road was cramped in a cellar that was utilised as a prison for people to be kept and used for meat. Nevertheless, the father and son maintain a goodness of heart when faced with all kinds of immorality. The son through his innocence has a more generous and forgiving disposition; furthermore making it hard to watch his views mutate as he learns of the baseness that humanity is capable of. The tale of two human beings, anonymous in their characters – because it could be anyone of us – tears at the reader and forces you to make your own decisions as you read on, forever emphasising the looming possibility of the destruction of our own planet. What would we do?