[Note, this review contains some spoilers from the film]

James Cameron’s billion dollar blockbuster behemoth shattered a mass of box-office records upon its release and became the highest grossing film in the world. Cameron even managed to defeat himself by knocking his previous film, Titanic, off of the top-spot with Avatar grossing $800 million more than the 1997 love story of Jack and Rose. While Avatar has achieved this accolade it seems to have fallen into a strange area being branded as a film that has no depth and is an average “popcorn flick” to appeal to the masses. At the same time some have even gone as far to criticise its mainstream approach calling the film cheesy and melodramatic. There is some truth to this belief but Avatar has far more meaning than many critics realise.

The first thing that is noticeable about Avatar is that James Cameron used the film, as many directors do, as a vehicle to communicate his own beliefs, particularly about the future of cinema. The concept of the visual and the way in which we watch films has always been a big issue with James Cameron who has a large emphasis on spectacle in all of his films. For example he pioneered developments in the technical side of the cinema for both The Terminator and Terminator 2: Judgement Day. In Avatar the audience are introduced to the importance of ‘seeing’ from the beginning where the first shot is of a pair of eyes opening which then mirrors the last shot of the film when Jake Sully (played by Sam Worthington, Hollywood’s flavour of the month) opens his eyes as a member of the native Na’vi. It has been noted that Avatar is a film that offers a unique cinema experience, and when watched in 3D, it lives up to this billing. Some have gone on to ask if the film would be as good if it was not shown in 3D. Of course the film would not but this is the point as James Cameron does not want it to be as good in 2D. Cameron has stated that our society seems to be watching films on smaller and smaller devices and Avatar is a film that has to be watched in the cinema for the viewer to gain the full extent of the cinematic experience that the film offers. Avatar, it has been claimed, has also achieved the accolade of being the most pirated film of all time and this is exactly what Cameron is fighting against. 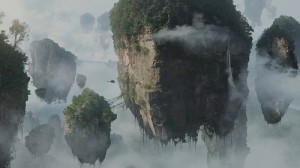 While Avatar does have a message about cinema itself the film also alludes to some of James Cameron’s personal viewpoints. The film makes several references to the war on terror, colonialisation and the Vietnam War as well as containing several messages about ‘green living’. Now these points are four large debates in contemporary society and in truth they are never developed enough in the film to warrant labelling the film as a ‘green film’ or an ‘anti-war film’. Many of these ideas come about due to the natural development of the plot such as having civilised advanced group of humans invading a less civilised group who are more in touch with nature and their surroundings where obvious comparisons can be drawn to the way in which the Native Americans were treated when their lands were invaded. Many of these comparisons that are drawn are not fully developed due to the fact that after the link has been made the plot turns to action in the ‘popcorn’ mode which, it can be argued, is to please the masses. 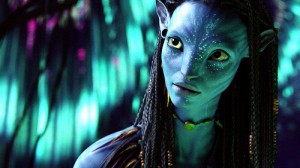 Even though I have praised the film in Cameron’s treatment on the future of cinema it does seemingly fall down on tackling issues of war and terror and the film does have some weak issues to do with the narrative. One issue that was a particular gripe of mine was the fact that the Na’vi had little characterisation as a separate race. They were portrayed as savages, immediately differentiating them from the humans, but then there was nothing else to distinguish them, except from the language that they spoke. They did not walk differently or move differently from us humans which did not sit well when they are meant to be an entirely separate race. In addition Roger Ebert makes an interesting point that the Na’vi have been particularly ‘humanised’ for the purposes of the film. Ebert noted that the character of Netyri is ‘sexy’ and appeals to the teenage male audience that many of the action elements of the film seem to be designed for. However one issue that many critics have raised, such as Mark Brown in The Guardian, was that Avatar does, at times, border on the cheesy and it is hard to suspend your disbelief during this film. While this may be true at some points, such as some of the clunky dialogue, all Hollywood films work as realistic pieces within their own specific set of aesthetic principles.

Avatar is a magnificent film in terms of its visual aspects being absolutely stunning in several places and the film even proves to be an effective commentary on the worth of going to the cinema. However, the film is not perfect as it does fall down because it does not sufficiently explore some of the themes it sets out to debate and the film does border on the cheesy side at times even for Hollywood standards. Overall though the film offers the viewer a unique cinematic experience that it needed in when we are watching films on smaller devices and in times of high digital piracy.